Bing vs. Google face-off, round 4

The big problem which massive multimedia online indexes face today, which may only get worse before it can ever get better, is with their capability to shield certain viewers from content they do not want appearing on their computer. Regardless of the entire debate over whether the Internet should have content regulation, individuals should have the right not to see what they do not wish to see, and they should also have the right to prevent their children from seeing it as well. It may be everybody's Internet, but in the end, it's my computer and it's your computer.

Since we started our Face-off series with Google and Bing just last Monday, we've gotten a lot of very positive comments and accolades from readers (thank you so much), plus we've received suggestions that we pit the two search engines together to see which one is the most capable of filtering out the junk. What do you not want to see on your computer, and what things about you personally do you not want others to see on their computers -- and which search engine cares the most about answering those questions?

So for this first test, suggested by reader input, we fed some queries to Bing's and Google's video search services that could quite easily lead to pattern matches to more...suggestive content, to borrow an overused aphorism. Now, both search engines' filtering adjustment tools are, to be honest, pathetic. Google's SafeSearch adjustment appears on a link that typically says, "Moderate SafeSearch is on;" Bing's is a popup menu on a link that says "safe search moderate (change)" (a little less intuitive, but still obvious). Both engines' menus tell you that their filters, when set to "strict," weed out sexually explicit content. So an enterprising youngster can override this setting in a heartbeat.

Now, it's here where one wonders, if Microsoft truly wanted to leverage the power of Windows, why it didn't do so here. With Vista, you can set up parental controls on user accounts; and those settings can be communicated through Windows Live IDs, or at least the capability is supposed to be there. For Windows users at the very least, since Bing uses Windows Live IDs for sign-ins, Bing should be capable of knowing when a signed-on user is a child, and responding by disabling that popup menu. And since the Live ID protocol is now open, there's really no excuse for Google's Gmail accounts not to enable the same functionality.

As a query, we tried anatomy lesson. With both engines' filters set to strict, the first thing that surprised us was the different contexts that the two engines settled on. Bing tended to gravitate more toward human biology videos (all of which were decent), while Google retrieved mostly figure drawing videos. Some of those videos contained decently nude human forms, which you'd expect to see in an art class. I grew up in an art studio, so I have a healthy respect for the human form and tend not to find any part of it offensive. Other folks may have differing sensibilities, but certainly none of what appeared here was, as SafeSearch states, "sexually explicit." 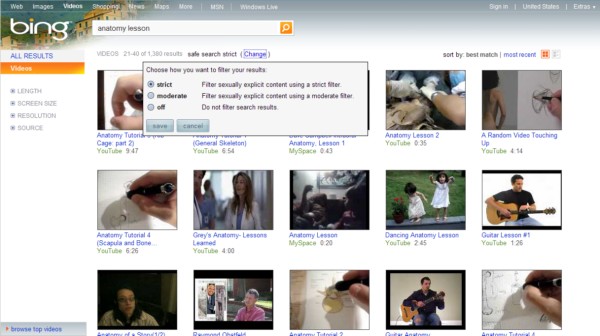 Keep in mind that while Google owns and operates YouTube, Bing also indexes YouTube videos, and can play them inline. So it's interesting that, given conceivably the same inventory of videos, what Bing failed to filter out that wasn't revealed by Google were video clips that were sexually suggestive. In other words, you might actually see some of this, um, stuff on prime-time network TV (the show "Grey's Anatomy" comes to mind, which was an unfortunate pattern match in several locations), but if my 11-year-old daughter were in the room at the time, I'd change the channel. In such instances, it does bother me that moving the mouse over the video's thumbnail triggers the video to play within that frame. So it's more difficult not to see a video you know you didn't ask for in Bing, than in Google. 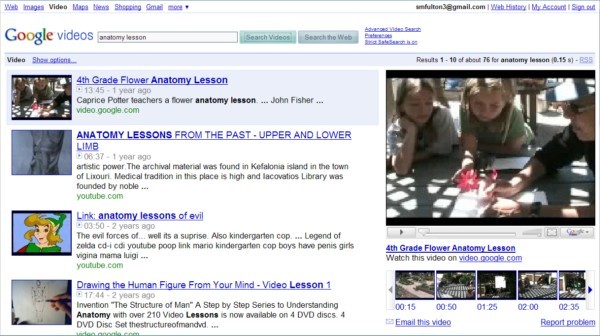 Meanwhile, however, Google's automatic filter tends to leave behind a great deal of content that could be filtered out with the aid of some human filtering. The third video in Google's retrieval list was made by someone with a very poor sense of humor: It's a video capture of a video game for youth where the soundtrack is interspersed with recitations of certain parts of the human anatomy, recited by a kid. It's not offensive, but it's not enlightening either.

Still, both video search engines appear to be doing the bare minimum, if you will, to filter out the bad stuff. So we'll move on to something that is a very sensitive spot for many mature people: breast cancer.

Next: Avoiding infringing on users' sensibilities...

10 Responses to Bing vs. Google face-off, round 4