A few weeks ago, in our ongoing series of duels between the reigning champion search engine Google and the contender "decision engine" Bing, we gave Bing the edge in a battle of the image filters: With both search engines' explicit image filtering turned on, we were able to explore a very sensitive topic -- breast cancer -- and have Bing yield sensible and respectful, but sometimes graphic, images without presenting offensive content.

Since that time, as we reported last week, Microsoft has implemented a very practical concept for helping individuals and businesses to ensure filtering takes place -- this after complaints were raised about how ridiculously simple it is for any user to turn filtering off in both Bing and Google. As Bing General Manager Mike Nichols announced on Friday, the thumbnails of images which Bing deems to be of a sensitive nature will be sent through a specific URL, explicit.bing.net. That way, users can take extra steps to filter questionable content. 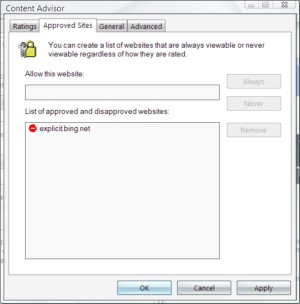 Bing's new URL method creates an unavoidable marker for spotting stuff that Microsoft's servers might not be sure about. Using this marker for your own benefit is a pretty simple affair -- you do not need a third party tool. For example, in Internet Explorer 8, from the Tools menu (on the lower right of the toolbar area in the new layout), select Internet Options, then from the dialog box, click on the Content tab. Under Content Advisor, click on Settings, then from the Content Advisor dialog box (Microsoft always puts settings within at least two, if not four, layers of dialogs) click on the Approved Sites tab. Then under Allow this website type explicit.bing.net and click on Never. Then to finalize your choices click OK, then OK again. 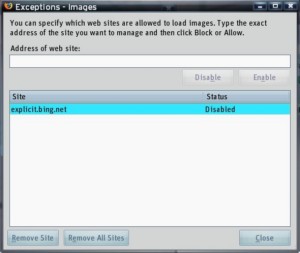 With Firefox 3.0.11, there's fewer steps, and one strange little twist we can't yet explain. From the Tools menu, select Options, then click on the Content tab. Beside Load images automatically click on Exceptions. Then in the dialog box under Address of web site type explicit.bing.net and click on either Block or Disable (for some reason, similar builds of Firefox 3.0.11 running on different systems may show one or the other, but they both have the same purpose). Then click on Close followed by OK.

In Betanews tests this morning, we first wondered whether strict filtering on both the server and client sides would diminish the respectful treatment Bing gave to the subject of "breast cancer examination." If certain images and videos had been screened, they might turn up under the "explicit" URL, and go missing on the results page, even if they weren't actually offensive.

Thankfully, it didn't change the Bing results at all. Videos that happened to show the human breast in a discussion of health and well-being, remained right where they were before.

Can thumbnail images be filtered from Google in a similar way? Not yet. Right now, all thumbnails that appear on Google's search criteria are sourced through images.google.com, and there's nothing we've noticed about the "texture" of these URLs that a client-side filter could grab onto to distinguish potentially offensive from probably non-offensive content.

Next: Sifting the good Britney from the bad Britney...