Barnes & Noble launches its own e-bookstore

It's an odd time to launch an e-bookstore, in the wake of Amazon's Orwellian book-deletion shenanigans as we are, but Barnes & Noble is jumping in with both feet. The new Barnes & Noble eBookstore launched Monday with over 700,000 titles, leapfrogging it past Amazon's efforts.

The store allows downloads to readers for the iPhone/iPod Touch and the BlackBerry, along with Windows and Mac machines; whatever the reader, it's optimized to the .pdb and .prc file formats. (The readers are free and come with free books -- including, if you register, a Merriam-Webster dictionary, plus access to half a million public-domain books from Google.)

Down the road -- next year, if things go as planned -- the bookstore will have a relationship with Plastic Logic and its planned eReader device. The 8.5" x 11" wireless reader is due out in 2010.

We tried out the store via the reader on a Windows Vista machine, and though even 700,000 titles couldn't meet all our e-book-acquisition needs (did fine on new nonfiction, did fine on public domain fiction, but the Tolkien estate isn't interested in getting me a digital copy of Lord of the Rings through B&N) we found the selection congenial, though periodical readers are out of luck so far.

There are a few collections in place already -- BN Classics (public domain texts, some nicely annotated and hyperlinked), the Library of Essential Readings (a Five-Foot Shelf for the modern era), Twilight, Pulitzer Prize winners, and such. We're not sure how Frank McCourt (author of Angela's Ashes, deceased this past weekend) ended up with a "Discover Great New Writers" tag, but hey. There were 902 books listed for under $5, and most titles seemed to be discounted between 30% and 60% from list.

Texts downloaded quickly, and typefaces generally looked great onscreen; images were rather pixelated. We were able to keep multiple books open with no trouble and found highlighting and adding notes simple and fun. We didn't get a chance to ask B&N to delete without warning a text we'd paid for and annotated, so results on that front remain inconclusive. (We did, however, notice that the FAQ asks readers who notice a title that has incorrectly been labeled as public domain contact Google about it.)

The reader operated mostly without incident, and we liked the option to keep multiple bookshelves for our growing collection. We noticed that once something's in the reader, it's in -- two sample chapters we downloaded couldn't be downloaded through the reader itself and didn't disappear when we deleted them on the Web site until we restarted the reader software. 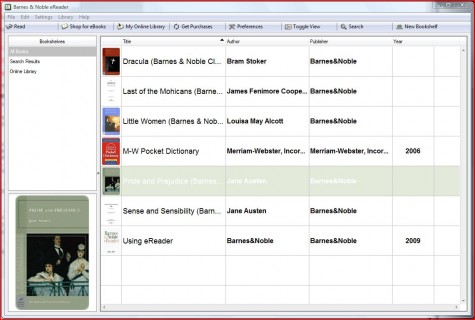 Affiliates of the various booksellers' sites may, by the way, be interested in one significant difference between B&N's digital-book program and Amazon's: Barnes & Noble told its affiliates via e-mail on Monday that they'll pay out a 6% commission on affiliate-driven sales. Amazon doesn't currently pay any commission on sales for the Kindle.

Overall, it's a nice start, and partnership with Google may help to lessen the likelihood of an Amazon-style meltdown. If you're in the market for an actual standalone e-book reader, you won't have hardware in hand for months yet, but if you already have one of the supported devices and want to dip your toe in the electronic-book waters, fire this up and give it a whirl.

13 Responses to Barnes & Noble launches its own e-bookstore