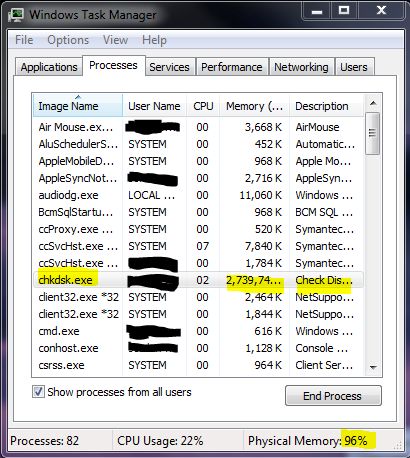 A contributor to the online forum TheHotfix.net has provided visual evidence of what appears to be a serious memory leak caused by the CHKDSK hard disk integrity checking utility included with a build of Windows 7 that has been tagged for RTM. The bug appears to occur during phase 4 of the disk check, and can push resource usage to the 96% level.

Tester Jordan M. Jacob provides a picture of the memory leak in progress, as depicted in Windows Task Manager, a portion of which is excerpted here. (It doesn't bode well for the integrity of the test that Apple's iTunes drivers also appear to be running.) Jacob goes on to warn that the leak is capable of sending the OS into the dreaded blue screen of death (BSOD).

Jacob called the alleged bug a "showstopper," saying it's big enough to warrant Microsoft suspending its release to manufacturing for Windows 7 -- a process which has already begun. Tomorrow is the anticipated date when MSDN and TechNet subscribers will have their first opportunity to download the finalized code, which is already being installed on new PCs by participating OEMs.

But should the bug's identity and severity be confirmed by Microsoft, it actually has other means available to it to quell the problem. One such mechanism is, quite ironically, the very thing which the Web site discovering the bug is named after: a hotfix, distributed via Windows Update and conceivably downloadable and installable during the Windows 7 setup process.

That almost too-obvious fact didn't stop one outside source, who confirmed the presence of the bug for himself, to sound the red-alert klaxon of doom, declaring the launch process already derailed and leading the story with the saliva-dripping words, "Oh boy!"

One Hotfix.net user answered Jacob by saying the problem may not actually be Microsoft's at all, but rather an issue with motherboard manufacturers that have yet to issue updates to their chipset drivers for the RTM builds. Nonetheless, the sheer volume of the virtual pow-wow among enthusiasts' sites today managed to rise to such a level that the president of Microsoft's Windows Division himself, Steven Sinofsky, responded to Chris123NT's forum in person this afternoon (Microsoft verified to Betanews this afternoon that the respondent is, in fact, Sinofsky).

Sinofsky said that Microsoft has been unable to reproduce the crash, though it has seen increased memory usage by CHKDSK. He then said that behavior was by design, intended "to speed things up" rather than slow things down. Later, he went on to say the following:

While we appreciate the drama of "critical bug" and then the pickup of "showstopper" that I've seen, we might take a step back and realize that this might not have that defcon level. Bugs that are so severe as to require immediate patches and attention would have to have no workarounds and would generally be such that a large set of people would run across them in the normal course of using their PC.

We appreciate the kind words that such a bug as above is "out of place" with Windows 7 -- we're working hard. We are certainly going to continue to look for, monitor, and address issues as they arise if required. So far this is not one of those issues.

Some have reported...that this specific issue repros and then goes away with updated drivers. We haven't yet confirmed that either but continue to try. We just kicked off overnight stress testing of 40 machines of variants as reported by [forum user] FireRx. We'll see.

Let's see if we can work on this one and future issues together. Deep breath.