In a move which could very rapidly multiply the number of total users of Windows XP N way beyond the paltry number of users, mostly in Europe, who invested in the product in 2005, Microsoft this morning quietly released a separate version of the release candidate for its XP Mode virtualization system for Windows 7. This version creates a virtual envelope for Windows XP N, the version Microsoft created without Media Player 9 pre-installed, to appease the European Commission.

But there's a very good reason Windows 7 users may want the (N) version instead: There's no really good reason for most users to be virtualizing Media Player 9 anyway, since XP Mode's real purpose in Windows 7 is for running older Windows apps whose developers didn't make the transition to Vista. If you want to watch a movie, you've got Media Player 11 in Win7.

The download profile for XP Mode (N) is therefore about 22 megabytes slimmer than for the non-N version. What's more, without the media drivers on board, the XP N platform may conceivably be a tad faster, though Betanews has yet to confirm this. 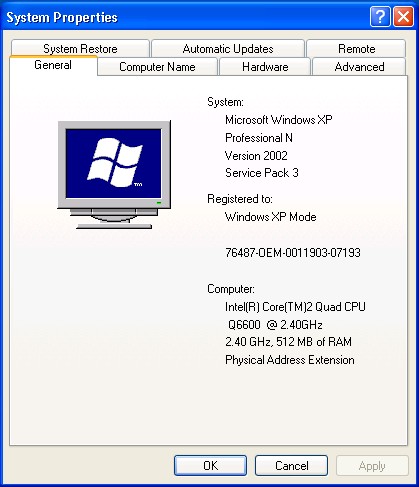 Microsoft released its initial release candidate for XP Mode last week, one day before the commencement of availability of the RTM code for Windows 7 on MSDN and TechNet. In Betanews initial tests that day, we discovered the XP Mode RC had significant trouble with installation and with establishing a working VM on the Windows 7 Release Candidate -- trouble that completely disappeared with the Windows 7 RTM code. Therefore, we recommend that you wait until receiving or purchasing the final Win7 before trying XP Mode RC or XP Mode (N) RC.

Because XP Mode (N) truly is the 2002 edition of Windows XP Professional recompiled without Media Player, it begins life in dire need of years and years worth of security fixes. The installation routine in Windows 7 enables the Automatic Updates feature in XP Mode to collect and install those updates automatically, though we've noticed that those updates actually came in waves -- once you install the first wave, you find yourself requiring successive ones. So you may be better off simply using Windows Update manually to download and install each wave of updates in succession, to ensure the stability of your virtual platform.

Keep in mind that the Updates program is geared to automatically omit Internet Explorer 8 from the list of updates, favoring IE6 instead. You have IE8 in Windows 7, so you may actually find IE6 not only useful for development purposes (downward compatibility being as important as it is), but also required for those older Web apps that remain on corporate intranets, and that were written to the older Microsoft standard. Also, Media Player is not among the updates offered.

An independent estimate of the total number of sales of Windows XP N in Europe, after the first year of availability, totaled under 1,800.

[ME's CORRECTION: I did it again and I didn't catch myself: I mistakenly referred to Media Player 9 as "Media Center 9." The error was completely mine, and I apologize.]