Google's Android development team has made the latest Android SDK available, providing a complete view of all the new features that "Donut" (Android 1.6) will provide.

While most of the features included in this incremental update are no secret, this is the first time they have been presented to the public in a single package.

Support for CDMA networks- The CDMA telephony stack is now supported, in addition to the previous support for GSM.

Text-to-speech API- A multi-lingual speech engine called Pico made by SVOX is included in Donut. This was one of the earliest features shown off for Donut at Google I/O this year.

Quick Search Box- Also shown off at I/O, Quick Search (then called "Android Search") is like the iPhone's "Spotlight" search. Quick Search Box framework lets users search through the phone as well as the Web, pulling up browser history, bookmarks, music, contacts and other data along with results drawn from the Internet.

New Camera Interface- From a single interface, the user can switch between still and video camera modes or look through the gallery. Additionally, the Android Team says camera launches 39% faster, and there is 28% less lag between shots. 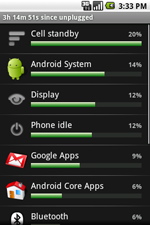 The Linux Kernel has been updated from 2.6.27 to 2.6.29, the OpenCore 2 media engine is now supported, as are a greater number of screen resolutions such as QVGA and WVGA, and new accessibility plugins such as tactile or aural feedback.

Google's Xavier Ducrohet today said, "You can expect to see devices running Android 1.6 as early as October. As with previous platform updates, applications written for older versions of Android will continue to run on devices with Android 1.6. Please test your existing apps on the Android 1.6 SDK to make sure they run as expected."