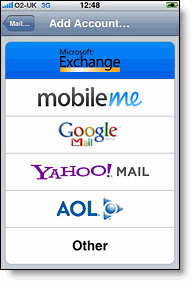 This announcement comes as good news for iPhone users who have, until now, had to pay for push Gmail updates by including it in their MobileMe subscription, or by paying for apps like PushMail or G-Push Mail. But it's also especially unfortunate for Tiverias Apps, makers of GPush for iPhone, an application which received a considerable amount of attention in mid-Summer, but didn't get approved until August, and has only been available in the App Store for a month and a half.

The setup, however, is not exactly straightforward. To set up Google Sync on the iPhone, users must have iPhone OS 3.0+, and then add a mail account under "Microsoft Exchange," and not "Google." From here, the user adds his Gmail account name and password, and selects m.google.com as the server.