In separate and very brief announcements this morning, Bell Canada and Telus -- Canada's #2 and #3 wireless service providers -- said they will be adding Apple's iPhone 3G and 3G S to their lineups this November. The move will mean the exclusivity deal between Apple and #1 provider Rogers Wireless, announced in October 2007, was probably a two-year agreement and is due to expire next month, even though Rogers only began selling the iPhone several months later.

Telus' and Bell's announcements were the talk of all Canada today, as news of the increasing availability of the world's most praised handheld gadget dominated the afternoon's headlines. At issue: Will this mean iPhone prices will come down, including for service; and will call quality go up? Neither new carrier made any promises this morning, and Apple is adding nothing to the discussion.

As it stands now, Rogers Wireless' reputation as the Canadian iPhone supplier is almost parallel to that of AT&T in America. It's getting hammered, especially since August when Rogers began raising rates for data service packages by $5 per month or more.
But it was only last year that Bell Canada and Telus began a joint effort to move away from their CDMA legacy platforms, and toward LTE as their 4G platform, but through GSM -- the iPhone's native protocol.

As independent analyst and Betanews contributor Carmi Levy -- who is based in London, Ontario -- told us this afternoon, "Bell and Telus worked very closely last year, launching a partnership to build up the [GSM] network together, figuring that their consolidated resources will be able to result in a more comprehensive, broadly available network than would otherwise be the case if they had proceeded to build them individually."

Just how much of the country these two providers will be able to reach through the iPhone, may only be determined for certain by Canadian iPhone users themselves. "We haven't seen the coverage maps of this new consolidated Bell/Telus network yet," Levy told us, "so it's still hard to tell. But it's likely an easy conclusion that it's not as extensive as the competing 3G network that Rogers has had for a number of years."

This week in the US, #1 carrier Verizon Wireless launched a competitive ad campaign focusing squarely upon the iPhone and its connectivity problems, openly mocking Apple's slogan while touting its network quality at the same time, using the phrase, "There's a map for that" (YouTube video here). (Microsoft might want to take a cue.) Perhaps the longest-lived grievance that iPhone customers in North America have had, has been the quality of their network. 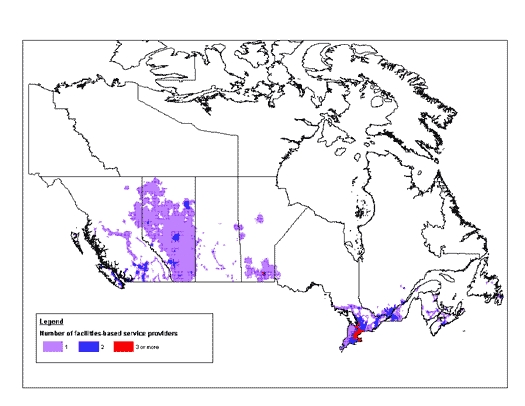 The area of Canada where 3G service was available at the end of 2008, according to CRTC estimates.

"Canada has always had network coverage issues simply because we have a geography that roughly parallels that of the US in terms of overall size in square miles, but we have a population that is only one-tenth as large," Levy reminds us. "So economies of building out to support that population just aren't as favorable to carriers in Canada as they are in the US. So in many cases, carriers have had to choose where they focus their coverage, and where they choose to let it lapse."

The legality of deals giving a single carrier exclusive access to a certain phone, even for a limited time, has been questioned by the US government. It's also been the subject of a parliamentary inquiry by the CRTC, Canada's equivalent of the FCC.

"Canadians as a people are very friendly and very accepting," said Carmi Levy, "but at the same time, we bristle at the prospect of monopolies. So any time anyone mentions the word in conversation with a Canadian, expect the temperature of the room to drop by at least five degrees. We are very, very wary...of lack of competition in the market; and Canadians for a very long time have looked rather jealously toward other...wireless markets, and have questioned why they [themselves] seem to have less coverage, higher prices, more limited device availability -- why they can't get the latest and greatest wireless devices, while Americans can. So Canadians...have wondered if the lack of competition was a huge driver of this.

"They can look to an announcement like this," he continued, "as a sign that monopolistic freeze is beginning to thaw, that the market is becoming more competitive, that you are able to get more devices from more carriers, that devices for data and voice plans will begin to come down...and that over the next 12 to 18 months, the three carriers that have pretty much owned this market up until now, will be joined by a virtual flotilla of competitors by virtue of last year's spectrum auction."

That auction to which Levy refers took place in July of last year, and was conducted with rules that intentionally granted new spectrum in each service region to two or three carriers that had never done business in that region before.

Openness...what a concept. But what exactly does Apple want with it -- the company whose iPhone marketing plan originally hinged upon a one-carrier-per-country code? Levy told us today he thinks maybe even Apple hasn't answered that question just yet, but it's hoping that Canada can help it come up with one.

"I think that to a large extent, Apple saw breaking exclusivity in Canada as almost like an incubator for the process," he said. "In other words, execute the process in Canada of moving from one exclusive carrier to a number of non-exclusive carriers, learn from the experience, and then apply those lessons to the much larger, more lucrative American marketplace when the time is right. So from where I sit, Apple is learning some very important lessons as we speak; and when it comes time for AT&T to give up its exclusivity with the iPhone, those lessons from Canada will come into play in the US as well."