It's undoubtedly been a huge quarter for Google's Android mobile operating system, and exciting developments are all falling into place.

Two weeks ago, the ceremonial giant foam pastry was planted on Google's front lawn. This time it was an eclair, and it signified the readiness of Android 2.0, codenamed "Eclair," which we get a first look at today.

Android SDK Tech lead Xavier Ducrohet announced support for Eclair in the Android SDK today, and unveiled some of the big capabilities in the latest version of Android, which is expected to hit the market soon on at least one of Verizon's upcoming "Droid" devices. In the developer video posted today, for instance, all the new features were shown off on a device connected to the Verizon network, and the release notes say it will be deployable in November.

The keyword with Eclair is interoperability.

Motorola recently launched its custom Android build with a UI called MotoBLUR, the central function of which is the ability to integrate with a user's many social Web services from a single interface. The new APIs included in Eclair give this communicative function to all developers.

So with the new Account Manager API, developers can centrally store account credentials on the device, the Contacts application can now sync and aggregate contact data from multiple accounts, and the sync adapters API provides full two-way contact sync with ANY back end.

To provide a single, unified face for this data, the Quick Contact function has been added. By clicking on a contact's picture, a user can pull up a menu of all the different ways to reach that contact...Gmail, e-mail, IM, Phone, and the various social networks. It's like the existent "live folder" concept for contacts, but brought together under the standard contact list, or in any app where a developer chooses to utilize it.

Android 2.0 also updates the Bluetooth API so apps can now access Bluetooth controls to discover, connect and share information with nearby devices, which unlocks the ability to make peer-to-peer and proximity-based applications.

On, and there's a little matter of Exchange support and multi-touch thrown in there too. Check out the release notes for a comprehensive list. 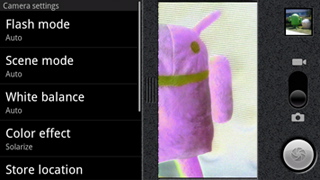