One of the nicest new features in Microsoft Windows 7 concerns the revised taskbar, specifically how many more choices are available to you when you right-click an icon, or when you just hover over it to see where all your open windows are. In Mozilla Firefox 3.6 Beta 1, which went live just minutes ago, the browser's integration with the Win7 taskbar is now on a par with that of Internet Explorer 8.

Specifically, the contents of the first handful of active tabs are transmitted live to the taskbar, meaning that the thumbnails contain live images of Firefox pages, including active video. In our initial tests just after we downloaded the final edition, we noticed a possible bug in this feature just with regard to Betanews.com, for reasons we're not certain of at the moment (maybe we scored Chrome too high last time). Our thumbnail doesn't show up yet. This isn't the only possible problem we've noticed today; the File Open dialog box seemed slow to sort entries when we called it up. Obviously this is a beta edition, so little problems like this could crop up, but now it's the public's responsibility to point them out.

If you're trying 3.6 Beta 1 out for the first time, and you don't notice the much-talked-about Ctrl+Tab feature working just yet...don't worry, you actually have to turn it on manually. It's an about:config setting called browser.ctrlTab.previews, which must be set to true.
It's only the first 15 minutes or so, but this feature seems to work flawlessly at the moment: When your browser window is open, the same thumbnails that appear in the taskbar for that window, now appear here in a selection screen that'll be comfortable for Windows users who use Alt+Tab already to page between open windows. Just typing Ctrl+Tab still moves the active tab forward, like before. To get the menu feature to work, you have to hold down Ctrl alone for a moment first, then press Tab. 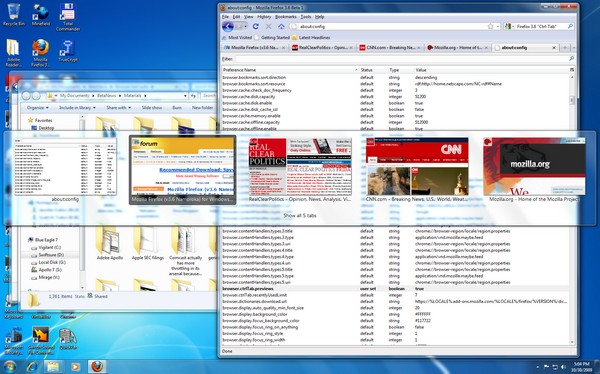 You keep pressing Tab until the highlight is over the page tab you want to open, then you release both keys. But there's another feature here that has "Aza Raskin" written all over it: When you highlight the button that says "Show all n tabs," Firefox brings up a Fennec-like menu of thumbnails. You can let go of your keys and still see them all. But there's also a search box that lets you narrow down the set of on-screen tabs to those whose titles contain the text you give it, in case you can't find a certain page based just on how it looks alone.

Previously, based on Betanews performance tests of nightly builds, we predicted that the first public Firefox 3.6 Beta 1 would have almost 23% better performance overall than the current stable 3.5 build. We're still tabulating figures at the moment, but in the early going, the performance gain on Windows 7 alone appears to be about 21% based on the scoring system we were using at the start of the month, but closer to just 10% using a revised scoring system we're premiering today. We'll have a full report later today when the final numbers are in.

2:05 pm EDT October 31, 2009 · The results are in, and they took a little longer than we expected because we wanted to verify a few extra points. (That and Firefox 3.6 Beta 1 came out later than we anticipated.) But here is the final breakdown: 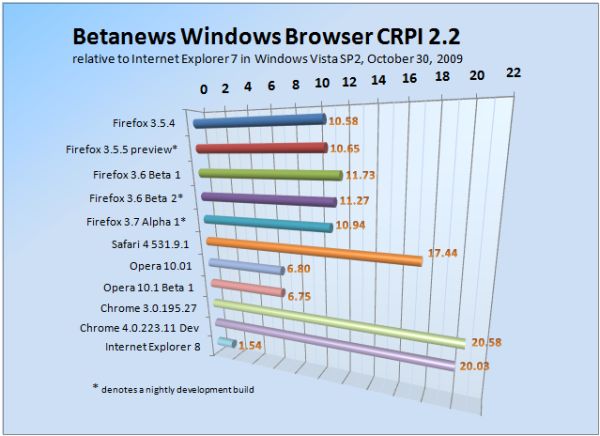 The new public beta 1 is Mozilla's best performing browser of the bunch -- more than its stable editions, and more than its private test editions. But with a few new tests added to our evaluation suite, the gap between 3.6 and 3.5 is actually not as much as we anticipated, although testers are reporting they can feel the speed bump.

A complete report on the latest round of tests appears here.