Google announced its open source Chrome OS last July and it has been a little more than a mystery to the wondering public since that time. Now, an official first look is mere hours away.

At 10:00 am PST (1:00 pm EST), Google will present a live webcast of Chrome OS, the search giant's attempt to "rethink what operating systems should be." Speakers this afternoon will include Sundar Pichai, Vice President of Product Management and Matthew Papakipos, Engineering Director for Google Chrome OS.

Besides finally getting to see just how Chrome will be laid out, we will get an overview of the underlying technology and find out about the operating system's 2010 launch schedule.

What we know about Chrome OS already:

Until today, these facts have only raised more questions. Far too many to even list here. Hopefully, once the Webcast gets rolling, we'll be able to finally put the most basic of these questions to rest. 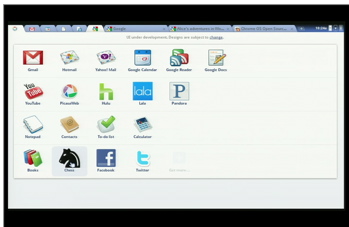 11:23am PT: The Q&A session has ended, and now it's time to go download the source code!

11:20am PT: It currently doesn't support printing, but locally pluggable devices are recognized, and more are being added. (Nobody in the Q&A session is asking about local network presence/file sharing, etc...that's disappointing.)

11:16am PT: Sergey Brin has joined the discussion.

11:13am PT: "If the cloud goes down, you're going to be affected no matter what machine you're on; Chrome OS or not." -Sundar Pichai

11:13am PT: Though most of what is going on in Chrome OS can be accessed simply through any other browser...Verified Boot/malware prevention/fast boot/file system security are all benefits to the OS.

11:07am PT: To reiterate, the current plan is to ONLY SUPPORT WEB APPS in Chrome OS, period.

11:05am PT: Media can be cached locally for offline access, and 802.11n is the focus wireless standard for connectivity.

11:03am PT: "We are working very, very, very hard to have a simple code stack." -Sundar Pichai

11:00am PT: Working to support plugins. Asked if they're working with Microsoft to develop a Chrome/OS Silverlight plugin, the answer was "no comment."

10:58am PT: Everything that works in Chrome the browser, including Codecs, will also work in Chrome OS...Flash, Codec hardware acceleration, and Chrome native client.

10:57am PT: The archetypal Chrome OS device is going to be a companion device.

10:56am PT: Q: Will there be an application store?
A: There are hundreds of millions of web apps, so we're working to solve the problem.
Q: What about driver certification?
A: Open source drivers whenever possible, but working closely with OEMs...

10:54am PT: With Web standards, many of those are still evolving, and the Device APIs are all still evolving too. Google is "working closely" with the big standards groups.

10:52am PT: Demo model running this build of Chrome OS is an "off the shelf Eee PC" (Asus)

10:49am PT: Google Chrome will ultimately be a "stateless computer"

10:43am PT: How Chrome OS is going to go to market: Chrome OS image is being built against hardware profiles rather than generically. No support for HDDs, only Solid state drives. Wireless card support will be announced on a case by case basis. You won't be able to just install Chrome. It's pre-install only. (Kinda like OS X?)

10:40am PT: System is continuously auto-updated. Most of the system is in a writable partition, and that's scary. System settings are stored separately, and user data is always encrypted. One benefit is safety of data; you can be assured that if some bad guy gets your machine with a screwdriver, he'll have a hard time reading those bits.

10:38am PT: In the security model of the conventional application, apps run as you. (Impersonation). This is a big deal because it enables hackers to impersonate you. This makes it hard for users to make decisions.

Chrome OS applications are all Web apps, so you have a different security model. Apps are treated at the system level as fundamentally hostile by default. Web apps can't change files on the hard disk, can't change the power setting. (Evidently something does, but that's not being discussed.)

All apps run in secure namespaces. "Every tab that you run in Chrome OS is run completely separate from other tabs in the OS -- we've protected tabs from other tabs, apps from each other."

10:24am PT: Instead of browser tabs, they have become "application tabs," and the far left tab is a menu of Web apps, there are also dedicated tabs for gmail, Google Docs, etc. "Panels" pop up from the bottom which can lay Web apps on top of one another.

10:21am PT: The UI is meant to feel like a browser, so it looks like the Chrome Browser. (as TechCrunch found out several weeks ago.) Bear in mind, this is a whole year ahead of release, so code is still being checked in right now.

10:18am PT: Chrome OS is a "better model for personal computing," focused on: speed ("we want it to be blazingly fast, like a TV") simplicity (every application is a web application, nothing to maintain, all data is cloud data...sort of like a dumb terminal without the "dumbness") and security ("we run completely within the browser security model")

10:14am PT: Trends that Google is excited about: Growth of Netbooks, Growth of cloud usage, Convergence of phone and computer functionality.