Google Goggles: Hands on with the Shazam of the Real World

As an Android fan, I've been looking forward to Google Goggles since the second I heard about it, and today it has officially been made available. It is a new lab from Google which turns your Android device's camera into a search input device. Similar to the way Shazam can identify a song by its audio "fingerprint," Goggles can identify landmarks, books, logos, artwork, and contact info simply by looking at it.

From the very first query, I was hooked. Maybe it's because my experience was so interesting. The very first piece of data I submitted was the PriceWatterhouseCoopers logo on my colleague's coffee cup on the desk next to me. Rather than return information about the company, the result was tennis player Jimmy Arias. I figured something wasn't quite right and snapped another picture for a second try. The results were the same.

But then I noticed why this was the answer: 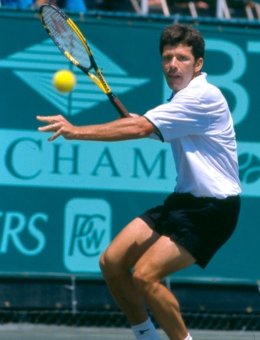 Notice the logo down by his knees? Google Goggles saw it and matched it up with my query in just seconds. Discovering this fact was ten times more rewarding than if the app had just linked me directly to the company's Web site. So I went crazy and attempted the logos of everything in my immediate surroundings: the EFF, Snapple, Dell, and Apple. Only Snapple's worked, linking to the very image I captured, and then to the company's information, the rest were inconclusive.

Contact information is another useful and clever feature of Goggles: Using optical character recognition (OCR), scanning a business card automatically inputs contact information into your address book and returns Web results against the name. Scanning my own business card for a test, most data was returned passably: My office and direct numbers were each in their own field, and my name was in the name field. My e-mail address and URL were both slightly flawed, however. I apparently now work for a company called "tetanews," which is can be found at wwrw.tetanews.corn.

At least it was good for a laugh. A second scan in better light pulled in all the information flawlessly. Unfortunately, Goggles does not utilize the flash on the Motorola Droid for snapping images.

To test the book cover search, I randomly pulled a book called "The Call of the Siren: Manatees and Dugongs" off of a nearby shelf. It only took one try, and Google Books pulled up the abstract and cover image, a link to Amazon.com's listing, and a link to information about the author, Tim Dietz.

With GPS turned on, Goggles also acts as an augmented reality app, with tabs that indicate nearby points of interest along the bottom of the camera view window.

It's a free app available right now in the Android Market, like most of Google's other apps for Android, it's an absolute must have, even at this early stage. We're testing Goggles on the HTC Dream/G1 as well as the Motorola Droid, and I will post our extended results in the comments section. If you're an Android user with a different device, We'd like to hear your results.

10 Responses to Google Goggles: Hands on with the Shazam of the Real World