Firefox 3.6 Beta 5 moves ahead, but more work to be done

Betanews tests with the latest Beta 5 release of Mozilla Firefox 3.6 show some respectable performance improvements, in the race to catch-up to Google Chrome. One of those improvements -- the full impact of which we'll see over time, as Web servers improve their scripting to support it -- is asynchronous scripting. It's a feature added to the HTML 5 standard, and Firefox 3.6 will be the first browser to support it.

Ironically, however, our tests this afternoon with the WHAT Working Group (WHATWG) working draft page explaining HTML 5 features, including asynchronous scripting, consistently crashes Firefox 3.6 on our Windows 7 test machine. To certify that the problem was limited to the beta, we tried the same page (which we've read before with no problem) with the latest stable Firefox 3.5.6. That browser also crashed.

The page in question is a particularly long page with multiple concurrent edits, and a floating element along the bottom that enables reviewers to mark passages that may be in error and submit comments.

At first, in our tests, Internet Explorer 8 does not crash, but that's not to say it's out of the woods. IE8 doesn't display the floating element, and the vertical scroll bar can often remain stuck for seconds at a time before releasing its virtual grip on the desktop. Asking it to search for text inline in the page results in what appears to be a hang, at least for as long as a full minute, before IE8 responds.

The page's author is Google's Ian Hickson, but that's just coincidence. The fact that the leading alternative browser for Windows has significant difficulty rendering a large page with complex, collaborative content, shows that stability can still be improved. 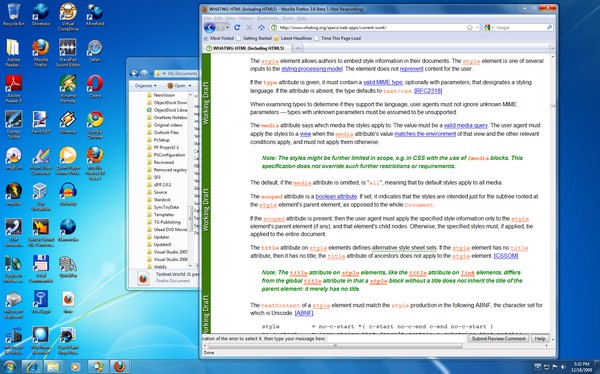 That's not to say Mozilla's testers haven't already done a stellar job. Over 1,500 separate bugs and feature additions were made to 3.6 since the initial alphas, and about one-tenth of those were fixes to Beta 4. A handful of unresolved bugs are pending, according to the organization's Bugzilla database.

Preliminary Betanews tests on Firefox 3.6 Beta 5 running in Windows 7 RTM show some respectable performance gains, as Mozilla creeps into the territory blazed earlier this year by Google Chrome. Using our CRPI benchmark suite of 69 separate data points, Beta 5 scored a 12.59 in Windows 7, compared to an 11.12 for the latest stable Firefox 3.5.6. That means that Beta 5 is showing 13% improved performance over the current stable version, which is a little better than 11 times the performer of Internet Explorer 7 in Vista (the slowest browser we test, on the slowest platform).

By comparison, the latest alpha version (not yet accounting for "public" comments, at least not officially) of Firefox 3.7 scored a 12.95 on the same tests. The very latest dev build of Google Chrome (4.0.266.0) scored a 20.56, while Internet Explorer 8's score remains mired at 1.54. Again, these are the Windows 7 scores, and do not yet take into account Vista and Windows XP performance.

Our test suite, however, does not yet take account of asynchronous scripting. It's a feature that has yet to be seen in many Web pages and services yet, though Google is actually making some headway here. Last December 1, Google began offering an asynchronous tracking script for servers to add to their Web pages. In announcing the feature, Google Analytics team member Brian Kuhn credited Firefox 3.6 as the browser making this feature possible.

16 Responses to Firefox 3.6 Beta 5 moves ahead, but more work to be done