The problem with characterizing any kind of business, including information technology, as "war" is that it immediately polarizes the opinions not only of the war's practitioners but also of its observers. Once an enemy is formally declared, the concept of "If you're not with us, you're against us" becomes self-fulfilling.

Inevitably, since everyone's hands emerge equally bloodied, the original, unifying sense of polarity that marked the outset of the war, becomes lost. Any ethic or principal or qualitative substance that characterized one side from the other(s), is usually compromised. Before long, people forget what it was they were fighting for, or fighting against. And often, the war gets cancelled for lack of funds.

In February 2008, Groklaw reporter Pamela Jones uncovered a piece of public evidence from the Comes v. Microsoft antitrust trial in Iowa, that spelled out the symbolism that characterized Microsoft's public stance throughout the 1990s and for the first part of the following decade. Early in 2000, a company technical evangelist named James Plamondon produced an internal company presentation entitled "Effective Evangelism" (PDF available here, from Groklaw), but which came to be known by its initial heading, "Evangelism Is War."

Technologists were shocked, shocked, to discover that Microsoft ever adopted a belligerent stance against its competitors, forgetting that perhaps all of the companies on Plamondon's list at that time took similar stances against each other and Microsoft. Although it can only be said that Plamondon gave this presentation and that his viewpoints may or may not have reflected the official stance of the company, it speaks of the aggressive and conquering nature of a company that had already achieved unquestionable market dominance.

It also foretells of the strategy shift to come: the disruption of existing competitive alliances, the more compliant and even compromising position with respect to countries' federal regulators and authorities, the building of bridges as opposed to dams, and the knowledge that the world was looking over its shoulder. No move could go unchecked.

But the real strategy shift story of 2009 only begins with Microsoft. With the economy for a time in free-fall and the revenue picture looking bleak, especially among many companies that rely to some extent upon Microsoft's platforms, the typical belligerent stance -- even to the extent that Plamondon presented it in 2000 -- ceased to be cost-effective in 2009. In short, making enemies wasn't paying off...for anyone.

The unbundling of marketing from warfare

The year 2009 began right away with the European Commission asking a question that at the time seemed like a re-animated corpse: Should Internet Explorer continue to be bundled with Windows? It was the notion upon which Microsoft's entire defense against the US Justice Dept. was based a decade earlier: that the Web browser and the operating system were irrevocably sewn together.

Microsoft had the option of publicly arguing that Mozilla Firefox, Opera, and the other major Web browsers in the Windows market were non-commercial, at least in the non-enterprise space if not entirely, and were therefore not officially "market" competitors. That argument may actually have carried with it some legal precedent, and the company may conceivably have even won...after a costly struggle marked by a very likely congregation of public sentiment around the underdogs in the fight. 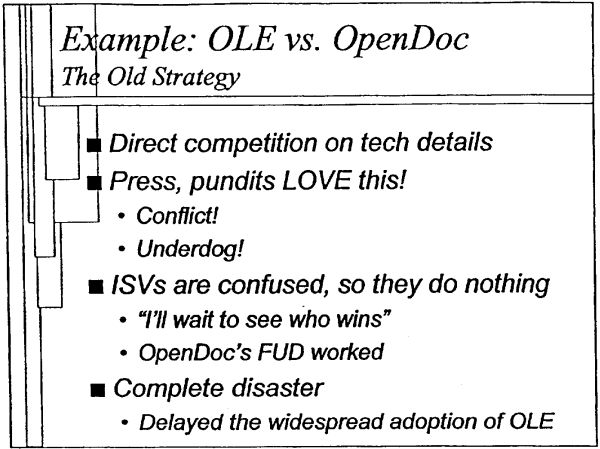 To say that we in the technology press would not have relished every moment of such a fight is to ignore the essence of who and what it is we are. It is a fact that Microsoft's James Plamondon pointed out very effectively, as evidenced by this slide from his 2000 presentation to the Developer Relations Group. Most every serious technology issue of the past quarter-century has been earmarked by the telltale abbreviation "vs." or, when matters turn worse, just "v."

By the end of 2009, Microsoft would settle the issue of browser bundling with the European Commission using a strategy whose roots may lie in the era of the Plamondon preso: It complied, and made every effort to present itself as willing to make restitution.

As a result, Microsoft lost the ability to bundle IE8 with Windows 7 in Europe, and is being compelled to give all European Windows users the option to install competitive browsers. But what else did Microsoft lose? Not very much. It certainly did not lose face.

What was gained? Look at the dramatic change in public sentiment, which began the day that the EC expressed skepticism over Microsoft's intentions. Was "complying" some sort of evil plot to mask a secret desire not to comply? As Betanews reader kashin wrote at the time, "This whole EU fiasco is turning into a case of, if a company is too successful, we must find fault, punish it, and treat it as a cash cow by imposing various fines, all the while pretending we're doing it for the benefit of the public."

Then on the day the Commission and Microsoft reached a compromise on the contents of the browser "Choice Screen" presented to European Windows users, in declaring victory, outgoing Commissioner for Competition Neelie Kroes invoked an analogy that may later come back to haunt her successors: If multiple bottles of shampoo are available in a market, she told an audience, a supermarket should carry each one: "What we are saying today is that all the brands should be on the shelf."

That provoked this response from Betanews reader dkratter: "This is just proof that the EC is not interested in increasing competition or protecting the consumer, only in shrinking Microsoft's share of the browser market. If the EC were actually interested in increasing competition, it would require all OS manufacturers to have the same browser choice screen...Typical EC nonsense."

These responses typified Betanews' small sampling of global public sentiment. But there's no question that, had Microsoft chosen the opposite tack and fought out the EC case like it fought out the US case, such galvanization of any plurality of individuals' opinions in favor of Microsoft would have been impossible to achieve.

Next: Turning the other cheek...works