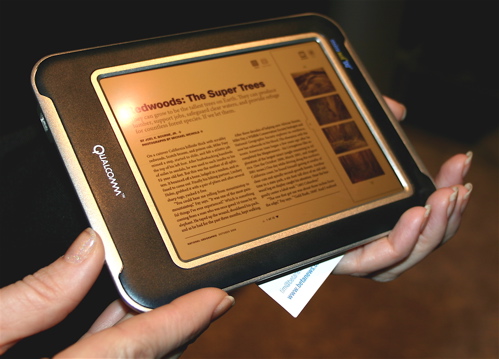 What is so fascinating about the display technology being developed for e-readers is that it gives us a long-range peek into the possible, and even likely, functionality of PCs several years down the road. Today, Amazon's Kindle series, Sony's Reader series, and Barnes & Noble's two readers all utilize electrophoretic "E-paper" displays, and we've found plenty of other screen technologies being employed in e-readers on the show floor at CES 2010. Some companies, like Jetbook makers Ectaco, favor technologies like passive TFT in their screens because they consume less power but supply color and support higher-frame rate animations.

But this week, Qualcomm said it's ready to begin selling screens using its own unique technology called interferometric modulation (IMOD), which Qualcomm's marketing director Cheryl Goodman told Betanews today is a reflective technique comparable to the prismatic effect created when a diamond is held up to a light.

The screen is colorful and retains visibility when viewed at different angles. Like other unlit e-readers, it does require a considerable amount of ambient light to be readable, but that does not sully the picture quality at all.

Qualcomm's demo unit is not an e-reader in itself, but a proof-of-concept for how other manufacturers may use Mirasol displays in the future. So we only saw how the screen animation looked, not how responsive an e-reader with Mirasol would be to external commands. This was not a touchscreen unit, but Goodman told us Qualcomm has the technology to ship these screens to OEMs with touch sensitivity.