Boxee: We didn't steal anything from Hulu 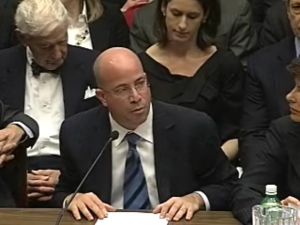 During the few comments he was asked to make during his testimony before the House Telecommunications and Internet Subcommittee earlier today, NBC Universal President and CEO Jeff Zucker was asked by Committee Chairman Rep. Rick Boucher (D - Va.) whether Hulu -- a video Web service co-owned by NBC -- intentionally blocked the ability of Boxee's media center application for PCs to replay Hulu videos. Rep. Boucher's question was by way of ascertaining whether a combined Comcast + NBCU entity would routinely block competitors' access to programming it generated.

That accusation before Congress that Boxee violated the law triggered a lengthy response late this afternoon from Boxee Founder and CEO Avner Ronen, on his company's blog: "Boxee uses a web browser to access Hulu's content -- just like Firefox or Internet Explorer. Boxee users click on a link to Hulu's Web site and the video within that page plays. We don't 'take' the video. We don't copy it. We don't put ads on top of it. The video and the ads play like they do on other browsers or on Hulu Desktop. And it certainly is legal to do so."

The question of whether enabling access to another Web site's video through one's software is effectively "redistribution," cuts to the heart of the major issue of contention surrounding the Comcast + NBCU proposal -- since Comcast is essentially in the redistribution business. Opponents of the deal (one of whom spoke out forcefully before Congress today) allege that Comcast's motive is to extend the legal notion of redistribution to the Internet realm, in such a way that the reuse of content always carries with it some type of license...and probably some type of fee.

Boxee's Ronen went on to say that while he did receive requests to disable Hulu access from Hulu's management, those requests were said by Hulu CEO Jason Kilar to be on behalf of NBC.

Indeed, in a blog post last year to Hulu's own company blog, that's how Kilar explained the situation to Hulu users: "Our content providers requested that we turn off access to our content via the Boxee product, and we are respecting their wishes. While we stubbornly believe in this brave new world of media convergence -- bumps and all -- we are also steadfast in our belief that the best way to achieve our ambitious, never-ending mission of making media easier for users is to work hand in hand with content owners. Without their content, none of what Hulu does would be possible, including providing you content via Hulu.com and our many distribution partner Web sites."

One Response to Boxee: We didn't steal anything from Hulu