In an early morning blog post Friday, Microsoft Deputy General Counsel Dave Heiner announced that final field testing of the company's Web browser ballot screen for European Windows customers (XP, Vista, and Windows 7) is under way now. The goal is to have a fully operational ballot screen by March 1 -- a week from Monday.

"External testing of the choice screen will begin next week in three countries: the United Kingdom, Belgium and France," Heiner reported. "Anyone in those countries who wishes to test it can download the browser choice screen software update from Windows Update. We plan to begin a phased roll-out of the update across Europe the week of March 1."

Heiner's post offered two very small renditions of what the browser ballot should look like. A careful study of these photos by Betanews indicates that these screenshots might not have been taken consecutively, assuming Heiner's description is accurate.

As the rollout is currently being planned, Windows-based PC whose update features are set to automatic, will download the program that gives users the browser choice. At next bootup, if any version of Internet Explorer is pinned to the Windows 7 taskbar, it will be automatically unpinned. The screenshots show Windows 7. We do not know whether Vista-based systems with IE attached to their Quick Launch bars (a feature replaced in Win7 by the new taskbar) will unattach these icons as well, although since the process by which a program pins and unpins icons to these two devices is similar, it's safe to forecast that Vista users will notice IE icons missing as well. 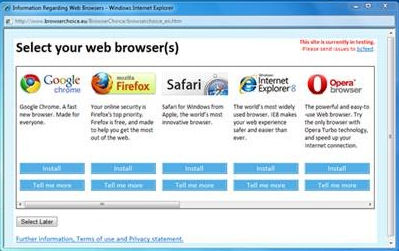 This will not mean IE is uninstalled. After the user reads the introductory screen (which explains why IE was unpinned, and gives the user an option to pin it back), the ballot screen appears. Here, just as Microsoft's previous public rendition of the browser ballot indicated, the world's top five Windows Web browser titles will appear in equally-sized vertical slots along the top row, with a second group of randomly organized titles made visible by scrolling to the right. What's different about this latest rendition (we apologize for the screenshot not being any larger or clearer) is that the obvious Internet Explorer controls, including the menu bar and search bar, are removed from this ballot.

However, at least in this rendition, the IE icon reappears in both the title bar and the address bar, which does remain. Microsoft's picture of the introductory panel shows the address bar missing, and the icon for the ballot being not the IE icon but a generic ballot icon Microsoft has used before -- for instance, with generic Control Panel components. In its browser ballot screenshot, not only does the icon reappear but IE is re-pinned to the Windows 7 taskbar.

The reason this actually matters (whether there's a blue IE icon in the corner or not) is because it was believed to have been a topic of complaint by opponents to Microsoft's original proposition for a browser ballot, which was later revised to look more like this one. If the second rendition is accurate, such a complaint could arise again, hopefully not pushing Microsoft past its current March 1 deadline for full deployment.

Heiner does not mention in his blog post whether this process would enable IE to be uninstalled. Based on our understanding of how Windows works, this will probably not be possible from the browser ballot, specifically if the user currently has IE7 or earlier versions. Although IE8 now can be uninstalled, no such procedure exists for IE7 and older versions. However, IE6 and IE7 can be upgraded to IE8 which, when uninstalled, should not leave too many traces of older browser parts strewn about the system directories. Still, that's a process that everyday users should perhaps avoid.