Two weeks ago, we warned the new leader in the Windows Web browser, Opera 10.5 Beta 1, that it would have to paddle fast to stay ahead of the ever-improving Google Chrome 5. Apparently only one side of that battle was listening: Opera did paddle fast, pulling nicely above 26 in our latest Windows 7 relative performance index tests. The newest Chrome 5, meanwhile, took a performance hit that sent it back the other direction.

As a result, Opera's lead over Chrome is no longer a narrow gap. The latest build 3271, released just today, scored a 26.17 on Betanews' Windows 7 RPI, representing over 26 times the performance posted by Microsoft Internet Explorer 7 on Windows Vista, on 70 different data points in 10 independently-developed test categories, using the same hardware. The previously tested build on February 11 scored a 25.83. Developers' build 5.0.322.2 of Chrome, released late last week, posted a Win7 RPI score 23.90, way down from 24.60 the week before for build 5.0.317.2.

What does this mean? As developers at Google scramble to make version 5 of its Web browser -- whose development track began just weeks ago -- more stable, that usually takes points away from performance. We usually see this happen at the very beginning of a development cycle, after the first obvious bugs are pointed out and eradicated, and toward the very end just prior to a product's release. But Opera hasn't had this kind of performance lead in years, literally coming out of the blue with performance better than triple its current stable release. Opera's developers may be riding the waves while they can.

So here's a message for anyone working on the Opera beta: A continuing bug in the beta's nested conditional statement handling remains responsible for as much as half a point of performance loss on our tests.

When you break down the test results by category, the news looks somewhat better for Chrome. The latest developer build actually regained the performance lead in the SunSpider computational test battery, with a 68.39 score versus Opera's 67.75. Mysteriously, the latest WebKit development build of Apple Safari 4 suffered terribly on this test. If you want proof that WebKit's own SunSpider battery is honest with its results, look at the result build 55138 of WebKit/Safari 4 posted today: a 38.92. Betanews retested and verified this result. The latest stable Chrome 4 posted the third best SunSpider score today with 58.55. 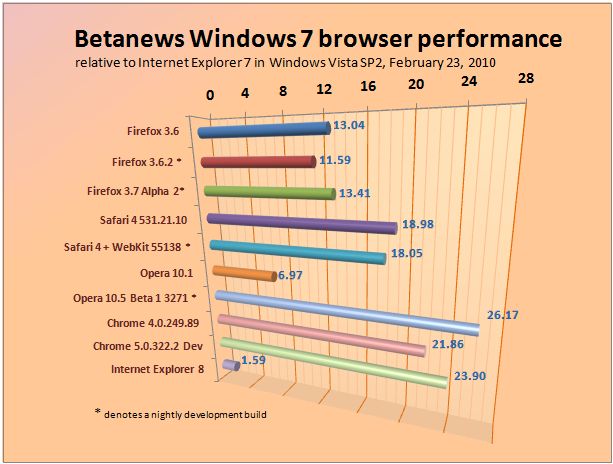 Click here for a comprehensive explanation of the Betanews CRPI index version 2.2.

The Opera beta took a performance hit in CSS rendering as well, which is usually Opera's strength, with a 6.73 score on the Nontroppo CSS rendering battery versus 15.09 for the latest stable Safari 4, and 14.18 for the WebKit/Safari 4 daily build. Chrome 5 crawls toward the podium here with 12.38. Opera 10.5 hangs on to third place in the SlickSpeed CSS selector test, which compares the browsers' performance in handling 10 different development libraries for referencing complex page elements using CSS. Chrome 5 has the best score here with a 13.29, compared to 12.43 for WebKit/Safari 4 and 11.68 for Opera 10.5.
In the Testnet.world JavaScript math operators' test, Opera continues hanging on to second place (it might be first were it not for the bug), with an 18.31 score versus 19.19 for Chrome 5.

So wait a minute...I thought Opera was in the lead here. What's going on?

In two of the three categories where Opera 10.5 does lead, it's by a breathtaking margin -- so much that, in the average, Opera ends up winning out overall, despite having second- or third-place performance elsewhere. In the old-style Web page loading test (which judges the handling of pages that would probably be considered tailor-made for IE6), Opera 10.5 scores a phenomenal 9.86. The next highest score in that category is posted by the stable Opera 10.1 with 8.57 (the stable build doesn't score very well elsewhere), followed by the stable Chrome 4 at 7.05.

And in the Canvas element test, which judges graphics performance in a Web app environment, Opera 10.5's lead here has only increased: to 69.00, more than double WebKit/Safari 4's next highest score of 31.81. Sadly, Chrome 5 posts a 22.76 in the Canvas battery.

For the Chrome dev track to retake the lead from the Opera beta, conceivably, it only requires radical improvement in just two departments. One is page loading, something Google thought it had the lead in at one time. On the standard page load test, Chrome processes bits at about 3200 KB/sec, while Opera 10.5's speed is just over 5000 KB/sec (that's processing speed excluding the speed of the network). And during the load process for the same test page, Opera 10.5 fires its DOM loaded event (signaling scripts that they can start referencing the Document Object Model) in 24 ms, while Safari 4 fires it in 34 ms, and both Chrome 4 and 5 in 39 ms. That's not an indicator of how fast the page has loaded (as some have mistaken it to mean in the past), but rather how soon certain elements of the script can start executing.

The other department is graphics performance, another former Chrome stronghold. Our Testcube 3D battery examines not only how fast the browser rotates two sizes of cubes in memory and re-plots them, but how consistent each iteration is compared to the next. If it costs cycles in the middle to get fast in the beginning, that's not good performance. For the large cube half of the test, Chrome 5 lost consistency points, with iterations as fast as 12 ms but as slow as 24 ms. That led to a 2.55 score for Chrome 5 here. Meanwhile, the Opera beta rotated the large cube as fast as 9 ms per iteration and as slow as 14 ms -- more consistency, better control, better performance. Opera has the overall lead here at 3.30.

With the browser choice screen being rolled out to Europe March 1, look for Google to make up some ground, particularly so it can roll out its campaign that the fastest browser is the best browser, without Betanews blaring a big neon pointer in the direction of Opera.