Yesterday, after the European Commission announced it had sent Google earlier in the month copies of complaints it had received from three search providers that Google refused to rank their search results highly in its index, the company Google had the least to say about was Foundem. That's a British shopping site that aggregates the results from UK online retailers' catalogs. As the EC said yesterday, the inquiry has not yet triggered an investigation.

Although the EC keeps private the contents of complaints it forwards on to the subjects of inquiries, there's a very good chance that Foundem's complaint may echo the public comment it filed with the US Federal Communications Commission, ostensibly with respect to its request for ideas for "Preserving the Open Internet." In that document (PDF available here), Foundem alleges that Google threatens the desired state of the Internet -- something commissioners have referred to as "search neutrality" -- by giving prominent placement to Google services in search results, under the label, "Universal Search."

Borrowing a very key term from the Microsoft antitrust proceedings, Foundem explains the situation thus: "Crucially, Google determines the exact placement of its own services independently of the ranking algorithms it uses to determine the relative placement of all other results. The degree of favoritism -- whether they appear first or third, for example -- is therefore entirely at Google's discretion. Google calls this process of merging its own services with actual search results 'blending' (others have justifiably called it 'bundling')."

The bundling system, as Foundem describes it, converts a generic search platform that's the overwhelming choice of a majority of Web users, from which Google does not derive income, into a huge promotional platform for Google services from which it does derive income. That has the effect of reducing the incentive for Web users to locate specialized sites, not only such as Foundem, but also mapping services such as Streetmap.co.uk and MultiMap.

As is commonly known, Google's formula for page rank uses a formula that combines the relevance of indexed content with popularity. As data throughout the last decade has made clear, popular services are made even more popular though better placement in Google search results. 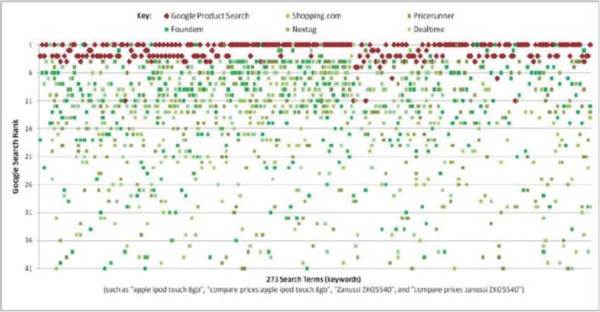 A chart from Foundem's complaint to the FCC depicting the prominence that Google gives itself in product search results.

So Google's automatic placement of its own services on its search results pages, Foundem illustrates, seeds that formula with enhanced popularity. Sidestepping the fact that Google's services were not relatively popular in previous years -- Google Product Search, formerly Froogle, being the most prominent example -- Foundem alleges Google was able to give itself the benefit that would normally be afforded independent services that achieved high page rank through popularity. 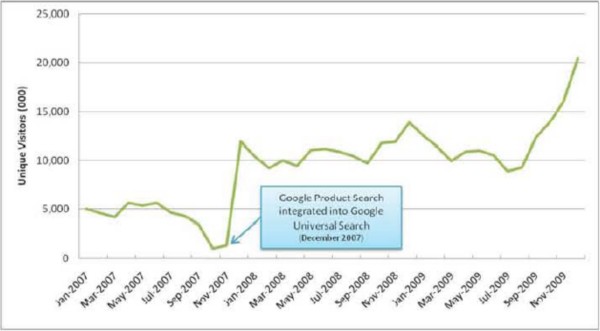 Foundem demonstrates how much more popular Google Product Search became after it gave itself prominence.

"Through Universal Search, Google can divert traffic from its competitors to its own services largely at will," writes Foundem to the FCC. "The rollout of Universal Search has been gradual, and, to a large extent, unnoticed by users. Google already gives preferential placement to its own Map, News, YouTube, Book, and Product Search services, and it has made it clear that it plans to continue expanding this practice into new services."

While Foundem's document clearly presents facts, it refrains from offering suggestions to the FCC as to how government should respond...or whether government can, or even should, respond. The question faced by regulators on both continents now is, is the fairness of the content of a publication (which is what, at one level, Google is) favored by a majority of its readers, worthy of government regulation? In this instance, Foundem's arguments more closely resemble those of publishers of competing telephone directories in the 1970s and '80s, that argued against the telephone company's monopoly over phone books -- even though, when the playing field was leveled, customers chose the phone company's books.

According to comScore's assessment of US-based general searches from home, workplace, and university locations last month, Google was responsible for processing 65.4% of Americans' searches. US #2 Yahoo handled 17% of searches, and #3 Microsoft (Bing) 11.3% (a 0.6% gain month-to-month, biting off some search share from the other two).

In general legal studies over the centuries, the term "monopoly" is used to define a market in which there is only one available producer of goods or services. Under US law -- particularly the Sherman Antitrust Act -- the term has been adapted to pertain to the degree of dominance a company has in a market where there are other players -- for example, Microsoft's dominance in office applications versus Corel, or Intel's dominance in processors versus AMD. The current borderline under US law is 75% market share.
Even so, there remains a major question as to whether "market share" applies with respect to Google Search. If we assume that companies doing business on the Web are online publishers, then Google Search becomes a publication; and there may be no precedent in US law for mandating the content of a publication once it becomes very popular.

The same questions, however, may not be applicable to European law. There, Google is more clearly interpreted as a service, and the nature of such services that take place on European territory are considered business transactions. Also, EU antitrust law makes reference to a concept of the dominant player, mandating that it is the responsibility of any player deemed to be dominant, to play more fairly. Recently, the EC declared Intel a dominant player in its market, for having 70% or better market share -- below the US standard for a monopoly. So the possibility exists that, while the US may determine that Foundem's allegations may not necessarily trigger a more pro-active regulatory approach toward Web publication, the EU may come to a more final conclusion.

But how would that conclusion work? Specifically, should Google be obligated to provide other search engines' specialized results, among its own? And in the interest of fairness, should Foundem, Ciao, and their brethren also include search results from Google, Yahoo, and the other major players? Or should they be excluded from such obligations because they are specialist sites, while Google and Yahoo are not? If we expect government, of any country, anywhere, to take action in consumers' interests -- if we invite the proverbial elephant into the room -- then we must fully discuss, debate, and respond to all of these questions.

Yesterday, in response to our story whose headline began "Define 'monopoly,'" some of our regular readers asked for more information and references for some of the main premises of our story: specifically, the thresholds for a "monopoly" in the United States and a "dominant player" in the European Union.
It's a wonderful request, and I only apologize for being tied up with other matters, though here is our readers' much deserved response:

It is not really the Sherman Antitrust Act of 1890 that designates the threshold of dominant market share in the US, even though case law that references Sherman tends to also refer to the 75% threshold. Recent precedent was established by the 2002 ruling in one of the long-standing antitrust battles in American history, R.J. Reynolds v. Philip Morris -- the battle of the tobacco titans. US District Court in North Carolina essentially determined that previous interpretations of Sherman up to that point effectively evened out to a threshold of 75%, or thereabouts.

Specifically, Reynolds accused Morris of an unfair business practice: paying retailers for shelf space for their products. Those payments effectively came in the way of discounts on purchases, though they may be accounted for more like rebates. Morris' plan was such that it allowed competitors to set any price they wanted to for competitors' cartons, such as Reynolds' -- sell the other guy's product however you want, said Philip Morris, as long as you give us a set amount of shelf space. Part of Reynolds' complaint was that it was not in a position to offer retailers a plan that made a similar grant -- it literally could not offer a plan where retailers could sell Morris' brands for whatever prices they wanted.

The court in this case ruled in favor of defendant Morris' petition for summary judgment, on the grounds that Philip Morris may be dominant, but it's not a monopoly. As the judges found, Morris' ascertained 51% national market share was "far below the generally accepted 70 to 75 percent minimum share necessary to support a finding of monopoly power." This while citing the Sherman Antitrust Act, which doesn't actually set this threshold on its own.
The exact threshold for the European market share threshold is open to some dispute. Sometimes the nature or degree of that dispute depends on convenience. For example, in situations where the European Commission defers to member states for establishing precedent, some of those states then lean right back on EC competition law -- and cite 50% as that threshold.

In cases where the EC reviews a potential merger, under the Merger Regulation of 2004, it uses a different metric -- one which determines whether a market share number even below 50% would be considered dominant given the number of other competitors in the remaining market.

And in a very famous statement to Reuters in September 2007, then-Commissioner for Competition Neelie Kroes celebrated Microsoft's loss in its appeal of the EC's antitrust ruling against it, saying she hoped this would start knocking Microsoft down a few pegs. How much would that be, asked Reuters? "A market level of much less than 95% would be a way of measuring success...You can't draw a line and say exactly fifty [percent] is correct, but a significant drop in market share is what we would like to see."