At its f8 developers' conference in San Francisco this morning, Facebook CEO Mark Zuckerberg presented his vision of a cross-site social platform whose developmental state may already be quite far along. Essentially, he sees a kind of online social sphere wherein anything one communicates that he likes, gets channeled to Facebook, where that like becomes a public fact. 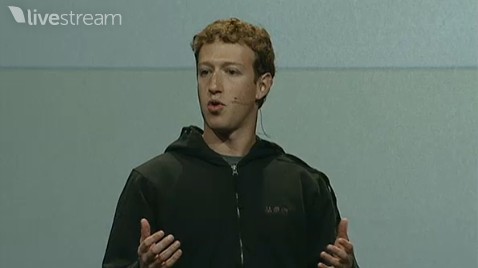 "Today, the Web exists mostly as a series of unstructured links between pages. And this has been a powerful model, but it's really just the start," said Zuckerberg. "The Open Graph puts people at the center of the Web. It means that the Web can become a set of personally and semantically meaningful connections between people and things. I am friends with you. I am attending this event. I like this band. These connections aren't just happening on Facebook, they're happening all over the Web. And today, with the Open Graph, we're going to bring all of these together."

The model Zuckerberg is discussing is essentially a published API for users of any service to associate themselves with something -- not just something they like, as he said at first, but also something they're working on, including documents. Those associations then become facts of the Facebook database.

On Monday, Betanews reported on 'Connections,' the types of associations that a Facebook user may establish between himself and something or someone he wishes to be associated with. As demonstrated at the time, Facebook now enables individuals to create Facebook pages that represent things or perhaps celebrities that they and others may like -- not a page by those celebrities as much as about them, similar to what Wikipedia provides now.

As independent Facebook developers were introduced to, for the first time today, existing Web pages outside Facebook can also be enabled to become the center of those associations, by adopting the company's new Open Graph Protocol. The protocol involves the use of special properties in the <META> elements of Web pages, whose collective purpose is to classify those pages for Facebook. In an extremely hypothetical example, a fan site for the movie Manos: The Hands of Fate might include the tags <meta property="og:type" content="movie" />, followed by <meta property="og:title" content="Manos: The Hands of Fate" />.

Surprisingly, a check of the accepted object types for things users may like shows that Open Graph will enable sites to declare themselves the centers of attention for video games, movies, TV shows, and albums (collections of songs gathered together onto a disc, originally reproduced using an analog needle apparatus), software or "apps" is not listed, and neither is "device" such as "iPad" (although it could conceivably be classified as product). If Betanews wanted to be a Facebook "like" site for beta software (I know, it's a stretch, but bear with me), it might be a difficult concept to explain using the current set of Open Graph tags.

"The Open Graph protocol...is currently designed for Web pages representing profiles of real-world things -- things like movies, sports teams, celebrities, and restaurants," reads Facebook's official explanation today. "Once your pages become objects in the graph, users can establish connections to your pages as they do with Facebook Pages. Based on the structured data you provide via the Open Graph protocol, your pages show up richly across Facebook: in user profiles, within search results and in News Feed."

Visibility in Facebook pages about the declared subject is one benefit to the Web site master. Another is the ability to communicate with users, via Facebook, who have declared they like the site's subject matter; and to receive analytics and statistics about how Facebook users are interacting with your pages.

If you think about it, it sounds like a sensible solution to the problem Yahoo faced two decades ago: cataloging commercially-oriented Web sites by subject. This system invites the masters of those pages to do the cataloging, with the payoff being a direct connection to the Internet's center of social activity. 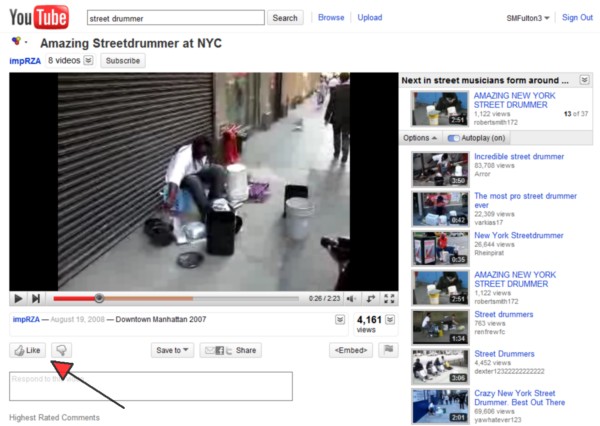 Google's YouTube is already part of the process, with its latest round of changes to its front-end controls. Where the "Favorites" button used to be is now something called "Like" (shown above), which does more than just submit a video you like to your YouTube favorites list. As the settings screen now shows (as depicted below), your likes may be communicated with Facebook (if you have an account there). 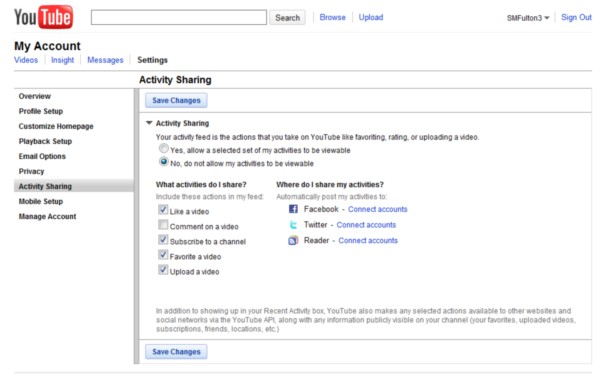 That may not happen by default, however, or by accident. First, the user must establish a Google Account (the necessary item for him to join Google Buzz), and then explicitly tie that account to Facebook (Twitter is another option, as shown above). If the user has already established a Google Buzz account, then those associations may already be made, and the videos a user likes may be fused with the Open Graph and tweeted to everyone around the world.

Also joining the service's new Open Graph today is Microsoft, which today launched a basic form of its Office Web Apps for use in creating Word, Excel, and PowerPoint documents that can serve as centers of attention, and that reside not in Microsoft's cloud but in users' Facebook news feeds.

"The fact that we've been able to adapt the Office 2010 Web Apps technology to work directly within our Facebook app truly speaks to the flexibility and power not just of the Facebook platform, but also of the Office system's rich 'contextual collaboration' capabilities," reads an actual Facebook-compliant document in Word format, published this afternoon by the leader of Microsoft's FUSE Labs development team, Lili Cheng. "And we'd never have been able to achieve our critical 'simplicity' goals had it not been for our ability to use a new test feature from Facebook that allows us to build an instantly personalized and seamless document authorization & sharing experience directly from our site."

FUSE Labs' Facebook apps are functional versions of the real Office Web Apps, running in the context of Facebook's platform...but on Microsoft's site. Conceivably, they can be created either online using the Web Apps themselves, or uploaded into the Web Apps using Office 2010 applications (which consumers will be able to begin using in earnest on May 12).

"This next version of Facebook Platform puts people at the center of the Web," he wrote. "It lets you shape your experiences online and make them more social. For example, if you like a band on Pandora, that information can become part of the graph so that later if you visit a concert site, the site can tell you when the band you like is coming to your area. The power of the open graph is that it helps to create a smarter, personalized Web that gets better with every action taken."