Google tells which versions of Android are most common 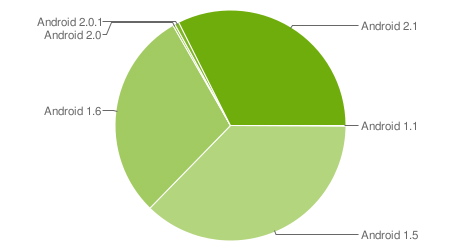 The Android Team today published a snapshot of the platform which shows the versions of Android most commonly in use. Though the platform is frequently criticized for being highly fragmented, there are three versions used far more than the rest.

Of course, these numbers aren't an absolute representation of the platform, because the data is based on the number of devices that accessed the Android Market between April 19 and May 3, 2010. But as we saw with the Camangi Webstation tablet, not all Android devices are sold with access to the Android market.

The Android team puts out this data to help app developers assess the Android landscape and decide which API levels to use when building their apps. There were complaints last week that Twitter neglected the majority of Android users by making its official Android app for 2.0 and up, and this data appears to support the complaints.

Last time we looked at this data back in December, Android 1.6 was the most common version by far, with nearly 86% of all devices running that version.