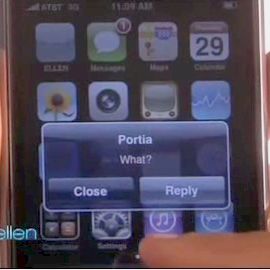 Technically, comedians and comedy writers cannot be held liable for certain copyright violations, especially if their parodies are presented in the context of a comedy show. But that doesn't mean major sponsors can't pull strings other than legal ones; and Tuesday morning, comedienne Ellen DeGeneres found herself apologizing -- in her own self-deprecating way, of course -- for a parody of an iPhone commercial that appeared on Monday's show.

As the show's own Web site admitted, "Apple wasn't thrilled with it, and now Ellen's in hot water!"

The fake commercial was framed in classic Apple style, focusing on just the device and the user's hands -- in this case, Ellen's. She attempts to demonstrate how easy the device is to use, but her fumbling ways with any kind of technology has been a part of her act for years. So she spends the entire 30 seconds, as the Apple-like whistling tune in the background plays on, attempting to send a sensible message to her partner, actress Portia de Rossi...and failing...before closing the ad by pleading for help with the thing.

In the video of Ellen's Tuesday apology, she directs her apology specifically to Apple CEO Steve Jobs, along with the staff at Apple and "Mr. Macintosh."

As of Wednesday morning, the video clip from both Monday's and Tuesday's show was still being streamed by Warner Bros.

But both Apple and US exclusive carrier AT&T are major sponsors of American Idol, Fox's twice-weekly, top-rated amateur talent program, on which DeGeneres appears as a judge. As part of Apple's signature sponsorship deal with that show's producers, signed in February 2008, music published by Idol contestants is made exclusively available through iTunes for 99¢ per download. Wireless text voting for contestants was made exclusive through AT&T. At the time the Apple deal was signed, the show's US producers personally thanked Steve Jobs for apparently having had the idea for the deal in the first place.

DeGeneres' daily talk show is syndicated through Warner Bros. Television, and its producers are not connected with those for Idol. However, the two shows have traded on-air endorsements; and her own iPhone app, which is part of her show's promotion, is among those available through iTunes.

According to a one-time Ellen show audience member, shows are typically taped the previous day for airing the next day. The exception is for Monday shows, which are taped the previous Thursday. So Ellen's apology probably was not taped prior to the airing of the show in which the parody appeared.

The air dates of both shows in this article have been corrected.