US needs $23.5 B more to fund the rest of broadband buildout

A 151-page report released this morning by the Omnibus Broadband Initiative (OBI) of the Federal Communications Commission (PDF available here) acknowledges an estimated $23.5 billion funding gap between the amount that government and business combined are presently prepared to spend to equip rural and underserved areas with broadband service, and the amount it believes is necessary.

The report doesn't say the government needs to raise that much more money in the coming years -- for instance, through increased taxes. Rather, it acknowledges that broadband buildout is accomplished by private industry, which is spurred to make those investments with government "incentives." But since almost by definition, the underserved areas of the nation will also be those areas that will almost certainly never become profitable for carriers to service in the first place, the problem becomes that no amount of government incentives may be enough.

"Only profitable business cases will induce incremental network investments. Private capital will only be available to fund investments in broadband networks where it is possible to earn returns in excess of the cost of capital. In short, only profitable networks will attract the investment required. Cost, while a significant driver of profitability, is not sufficient to measure the attractiveness of a given build; rather, the best measure of profitability is the net present value (NPV) of a build," the report reads. Later, it goes on, "Investment decisions are made on the incremental value they generate. While firms seek to maximize their overall profitability, investment decisions are evaluated based on the incremental value they provide. In some instances, existing assets reduce the costs of deployment in a given area."

The OBI built a sophisticated economic model of the United States, using what it admitted was often limited or scant data. Reasoning that in some territories, the model tends to overestimate coverage levels but in others it underestimates them, the authors conclude that the discrepancies on both sides should balance each other out when viewed on a nationwide scope. 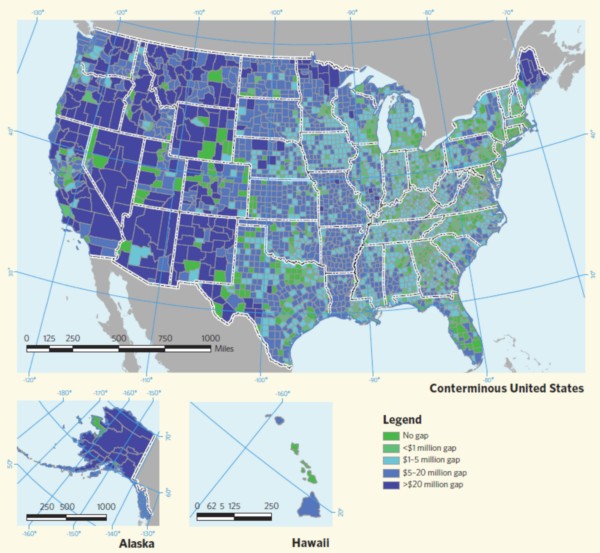 A county-by-county map of US states where the investment gaps range from over $20 million (dark blue) to non-existent (dark green) reveals the problem is mainly a matter of terrain: Oklahoma, a mostly flat state, is somewhat better served than the states of Washington and Oregon.

"As one might expect, one of the major drivers of cost, and consequently the gap, is the density of unserved housing units (i.e., the number of unserved housing units per square mile, averaged across each county)," the report reads. "Although density is not the only driver of gap, it is a significant one...In some areas, the gap exceeds the initial capex [capital expenditure] required to build out the area. These areas have ongoing costs that are in excess of their revenue -- meaning even a network with construction fully subsidized by public funds will not be able to operate profitably." 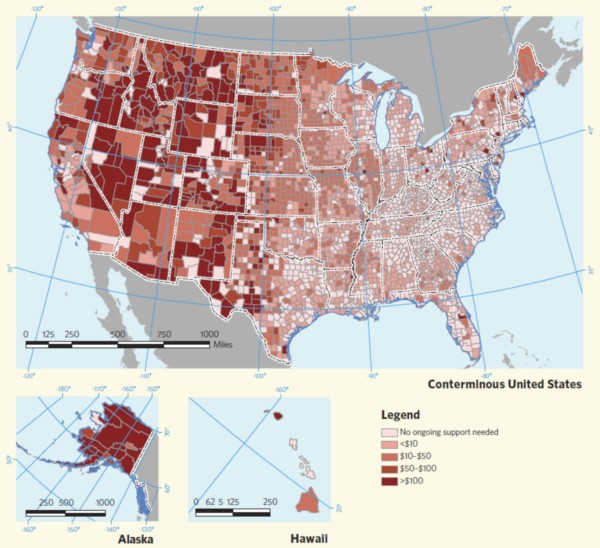 The problem with closing the $23.5 billion availability gap actually lies with the costs to be incurred after those costs: what carriers (or someone) will have to pay per household to maintain the network, assuming it ever does become 100% subsidized. Here, OBI presented another US counties map that helps narrow down the geography (or rather, the topology) problem: Nevada, Idaho, Montana, Western Colorado, Arizona, New Mexico, Eastern California, and West Texas, and of course, Alaska also show dark counties where the cost to maintain broadband availability once the network is established, will exceed $100 per household per month.

States the report, "The calculation of the $23.5 billion Investment Gap is based on the assumption that the government will not own or operate the network itself, but rather will provide funding to induce private firms to invest in deploying broadband. This is primarily because private firms can provide broadband access more efficiently and effectively due to their ownership of complementary assets and experience in operating networks. By subsidizing only a portion of the costs, the government provides the markets with the incentive to continue to innovate and improve the efficiency of buildouts and operations. In addition, since private firms will be investing a significant portion of the costs, the amount of public money required is greatly reduced. Simply calculating the incremental costs of deploying broadband is not enough to determine the Broadband Investment Gap necessary to encourage operators to deploy. To ensure that firms seeking an adequate return on their invested capital will build broadband networks in unprofitable areas, we solve for the amount of support necessary to cause the networks' economics to not only be positive, but to be sufficiently positive to motivate investment given capital scarcity and returns offered by alternative investments."

In the early 1980s, the first direct-to-home satellite systems began to help solve the problem of beaming television into regions of the country where not even cable ("community antennas") could reach. Couldn't satellite be the solution for the Investment Gap problem? As the OBI report states...that depends.

"Satellite-based service has some clear advantages relative to terrestrial service for the most remote, highest-gap homes: near-ubiquity in service footprint and a cost structure not influenced by low densities. However, satellite service has limited capacity that may be inadequate to serve all consumers in areas where it is the lowest-cost technology. Uncertainty about the number of unserved who can receive satellite-based broadband, and about the impact of the disbursement mechanisms both on where satellite ultimately provides service and the size of the Investment Gap, all lead us to not explicitly include satellite in the base-case calculation," states the report.

If services would actually make use of the satellite capacity that will be made available as soon as next year, the report states, the Investment Gap could be reduced by as much as $14 billion. However, while satellite service meets government standards for implementation, and for delivering service that the FCC now characterizes as "broadband" (4 Mbps download / 1 Mbps upload), the report says that too many variables, including bad weather, prevent satellite broadband from being declared reliable enough. Specifically, two of the government's prescribed use cases -- VoIP telephony and interactive gaming (yes, that's indeed a government use case) -- would be more severely impacted by these variable factors. Thus it might end up costing more to compensate for these factors than service providers may be willing to spend...and so much for $14 billion.