AMD to combat 'Intel Inside' with 'Who cares?' 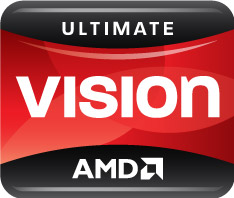 Ever since it stopped billing itself as a producer of "replacements" for Intel CPUs, AMD has struggled with the platform question: the need for OEMs to produce PCs based on pre-determined patterns. Manufacturers can achieve price breaks when they buy parts in bulk, and platforms can help them do that; likewise, they can reap even more benefits down the road from selling popular platforms to the public.

It was Intel that figured out the platform formula first, ironically through the help of a brand it no longer uses: Centrino. Up until last year, although individual AMD processors have been successful in the consumer marketplace, and Opteron as a brand has reclaimed its respect among server makers, it's never been able to crack the nut for consumer-grade platforms. Last September, AMD announced it would try yet another spin on the platform approach, unveiling a new "Vision" brand for classes of PCs based on AMD processors. OEMs such as HP, Acer, and Dell would use these classes not to denote the processor in their PCs, but rather what those PCs are capable of doing.

Today, in a press event held at its Austin, Texas headquarters the site of the Cannes Film Festival, the company celebrated the final stage of the Vision brand rollout. Now, all consumer-grade desktop and notebook PCs containing AMD CPUs will be eligible for co-branding based on four tiers of functionality, with each tier designating the everyday, real-world tasks that its PCs may perform.

AMD is now quite literally and specifically suggesting that OEMs provide this information instead of explicit specifications; and today on stage with AMD officials, representatives of the world's top three consumer PC producers said they basically agree.

"There's no single component, branded or unbranded, that's inside that PC that matters more to that end user than whether it's a Dell, an Acer, or an HP. That's the brand that matters," stated AMD Vice President of Product Marketing Leslie Sobon this afternoon. "Vision technology from AMD lets that brand be the hero. It lets our customer be the hero.

It's a compelling argument: Since there is no clear formula for mapping an everyday function, such as burning a homemade movie to DVD, to a number of cores or a set frequency or a cache latency figure, consumers are forced to trust salespersons' breakdowns of their respective retailers' good/better/best price/performance scale. Online reviewers have sometimes made honest efforts at presenting objective performance ratings, but nearly all of them have failed to do so consistently. And since the performance of all classes of PC tend to improve, the difficulty only increases for customers trying to understand why the lowest classes of PC aren't just as adequate as higher classes.

"What Vision is enabling HP to do for our customers is two things," stated Hewlett-Packard VP for worldwide marketing John Dayan. The first is to deliver a specific customer experience. For the second, he added, "The branding in the channel makes it so much simpler [for the customer] to walk in and say, 'Here's what I want to do with my computer, what should I buy?' Instead of trying to calculate speeds and feeds and all these different things, it's really more about, each of these different levels delivers different kinds of experiences depending upon what you want to do."

From an AMD presentation, the four task-oriented tiers in the Vision platform for notebook and desktop PCs.

Historically, AMD has implemented and perfected a product implementation process where new production techniques and new CPU capabilities are rolled out at the top of the line, whose OEM customers would produce PCs for enthusiasts and early adopters. Over time, those upper-crust parts work their way down into the mainstream segment, and then eventually the value segment -- and in recent years, that amount of time has been compressed in some cases to less than one year.

With that in mind, assuming this pattern stays in place, CPUs that qualify today for the Vision Black logo -- whose specific tasks include creating and editing Blu-ray quality movies -- would be marketed in the value segment by 2012. How will AMD respond to this inevitable course of evolution?

In response to this question, an AMD spokesperson told Betanews today that the company plans to make incremental adjustments to the Vision task scale, letting those Black-level tasks filter down to the Vision basic tier over time. And AMD plans to keep the consumer apprised as to when this happens and why.
"Vision will evolve as the hardware advances," the spokesperson told Betanews. "What are our most advanced features currently reserved for Vision Black will filter down to Vision Ultimate, Vision Premium, and Vision Basic over time. We will also be including generational modifiers for Vision that will indicate the latest technology."

So as Vision evolves over the next few years, expect to see "plus" signs and refreshes that indicate that this year's Vision, for example, is far ahead of last year's Vision.

In 2007, when AMD unveiled a new and separate metric from Intel's Thermal Design Point (TDP) for evaluating CPU power consumption, critics argued the move would make AMD chips more difficult to evaluate against Intel. To which the company answered the critics, yes, you're probably right. Today, AMD's Leslie Sobon was asked whether she thought the Vision scheme would make it more difficult for consumers to evaluate AMD-based PCs against their Intel-based counterparts. Her answer was, basically, yes.

"It'd be difficult to make the translation," Sobon responded, "but certainly I assume in the retail sales associate training, there is some combination to make people better understand. At the end of the day, it's who speaks usages, in our opinion, who wins. So Vision talks to what you want to do. It doesn't talk to a component that's inside that actually people don't buy. People buy a Dell, an Acer, a Hewlett-Packard. That's what matters most."

24 Responses to AMD to combat 'Intel Inside' with 'Who cares?'