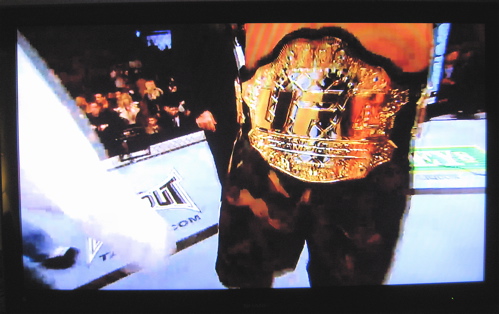 Two years ago, Roku launched the first set top box dedicated to Netflix's Instant Streaming. Since that time, Roku has added enough partnerships to make that $99 box into its own little a la carte TV service.

Later today, Roku will be pushing out another official sports network to round out the offerings from Major League Baseball and the National Basketball Association: The UFC (Ultimate Fighting Championship) Channel.

Roku users will be able to add the UFC channel in the Roku Channel Store, and then be able to access the popular pay-per-view martial arts events (with a linked account on UFC.com.) Not only will users be able to watch live streaming events, but they will also be able to watch archived events, and behind-the-scenes bonus footage weigh-ins, pre-and-post fight press conferences, and interviews.

The official first live streaming event on the channel will be UFC 114 on May 29th, but we got a sneak preview of the service with the broadcast of 113 just over a week ago.

In typical Roku fashion, the channel's layout is clean and simple. Most importantly, though, the actual streaming was flawless and high quality. With an appropriate connection speed, you will be able to watch the contents in high definition.

Besides offering on-demand access to all the bonus footage, 1.) events you have paid for are saved to your UFC account and are permanently accessible, like Amazon Video on Demand 2.) You can perform keyword searches of the archives.
The pay-per-view events cost the same on the Roku channel as they would through your cable provider.