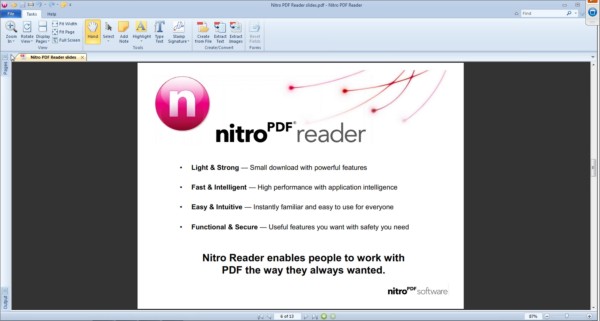 Even today, we tend to use the phrase "Adobe PDF" when referring to the Portable Document Format, despite the fact that Adobe released its ownership of the standard into the open community in 2008. The typical opinion has been that releasing PDF as ISO/IEC 32000-1 was more of a symbolic gesture, but that Acrobat would always remain the principal application for creating PDF files.

But it isn't a monopoly that users particularly like anymore. A security study last February by security software provider Webroot of its own SMB customers revealed that nearly a quarter believe they are susceptible to cyber-attacks on account of insecure plug-ins including Adobe Reader. That feeling is compounded by raw data from Mozilla providing evidence that as many as half of all Firefox browser crashes are triggered by either Adobe Flash or Adobe Reader -- a fact which compelled Mozilla's engineers to redesign the entire plug-in model for Firefox 3.6.4.

Today, the makers of what started out as a set of Acrobat plug-ins and later became a commercial alternative to Acrobat itself, are making their first real bid to unseat Adobe as the de facto software provider for PDF. The way Nitro PDF Software is doing this is by releasing today a free alternative to Adobe Reader that replaces the Reader plug-in entirely.

The replacement will be an application that not only lets users edit the PDF files they download, but type new text at any point into those files, and create new PDF files as well.

"PDF is all that we do. We live and breathe it. So the next logical step for us was to introduce a free PDF reader, but one that is revolutionary and that the world has been waiting for," pronounced Gina O'Reilly, Nitro PDF's senior vice president of marketing, in an interview with Betanews.

"With Adobe Reader, I'm sure you're familiar with the typical complaints: It's bloated, it's vulnerable to security attacks, but more importantly, it's simply lacking in functionality. All it is, is a viewer and a printer; and unless you have paid a premium to do anything else, that's all it does," O'Reilly continued. "A lot of other options in the market come with some sort of compromise. So in the case of Adobe Reader, that might be a large footprint and annoying reminder updates, [along with] restricted functionality, in the fact that there is none." 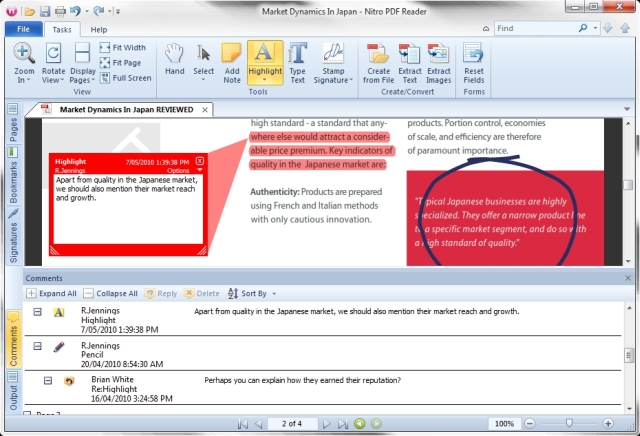 Multiple collaborators can comment on edits to a PDF document in Nitro PDF Reader.

Nitro PDF Reader is a stand-alone application that uses the Ribbon UI functionality made popular by Microsoft Office. If it has any drawbacks over Adobe Reader at all, it's the fact that it doesn't view PDF files inside the browser context. Instead, you download PDFs through whatever your browser happens to be, and they appear in the separate Nitro application context.
But in that context, the application will offer some features that will compete with Acrobat, Adobe's commercial PDF producer application line, the most obvious being the ability to create and save PDF files from scratch.

Nitro PDF's chief product officer Lonn Lorenz -- a veteran product manager from Adobe -- gave Betanews a demonstration: "Let's say that I have a file that I want to send around for comment and review. If I zoom in on this page and I want to create a Post-It note...As I put a note in place, it keeps track of who put the note down, what time and date that they added it, and I can add my note to that.

"When I send this out to people to get comments back on," Lorenz continued, "I can just go to the File menu and e-mail this PDF, and it'll automatically launch your e-mail client, attach this PDF, and you can send it off for review. Once you open this file and see this comment, you could add your own reply. With your reply to this comment, you could start a thread of conversation around this review. You could also use the text highlight tools, where you can highlight, cross out, or underline text...I can actually start to make use of my PDF files. Where the Adobe Reader and other readers are limited in this regard is, I can actually save my file! How simple is that? All the basic functionality in a free product."

One feature that I found truly inspiring -- something I would literally use every day -- is a simple button that lets you stamp a PDF form with a scan of your signature. Many legal firms have gotten into the habit of printing out the final page of a PDF contract, then signing the contract, scanning it back in, and appending it to the PDF, just so the final page can bear a signature. With this feature, Nitro PDF keeps scans of multiple signatures on hand, and you can stamp one and resize it to fit any location on a page. 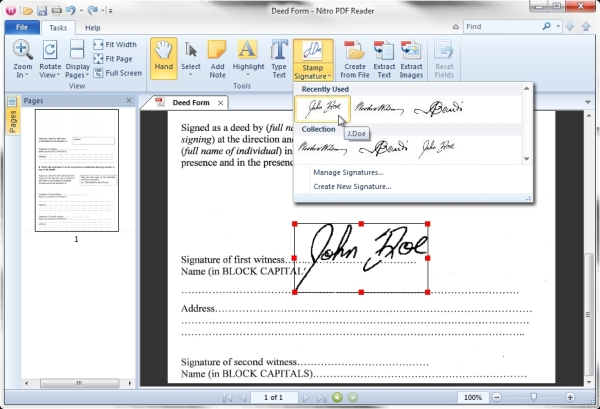 Though it's too early to declare that Nitro PDF "thought of everything," it's clear that during its beta process, its engineers did think ahead. The free Nitro PDF Reader does include the ability to protect files with a simple password, and to embed fonts where necessary (the company's commercial edition has more extensive options). And to help deter situations where certain PDFs can be maliciously re-engineered, users can selectively block their PDFs from having the ability to make embedded calls to Web sites, with selected exceptions -- a kind of localized firewall. Lorenz also told us users will have the ability to turn off JavaScript execution ability and leave it off.

"What Adobe has potentially made a very grave mistake in doing is not being more proactive in responding to attacks, and not really addressing them in any meaningful way," argued Nitro PDF's Gina O'Reilly. "So when we conceptualized Nitro PDF Reader...one of our main goals was to ensure that our product is secure, and that we are responsive. We're currently working with a third party to get validation for Nitro PDF Reader, so that we can stand up and say...the product stands up, and in the areas that we might not stand up, we will be addressing. We've kind of turned the security issue on its head, in that rather than expecting things to happen and then addressing them, we're trying to get on the forefront with this. It's very important that our users feel safe and secure when using the product."