After two high-profile Microsoft exits, is WP7 a device or a platform? 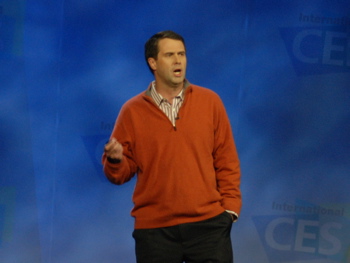 When a massive Microsoft corporate reorganization on September 20, 2005 vaulted Robbie Bach into the role of President of the Entertainment & Devices division, the explanation at the time was to enable the company to focus on devices where the goal was to promote devices, and on platforms where the goal was to promote devices. Xbox was a device, whatever MP3 player the company would decide to produce was a device, and obviously cell phones are devices should Microsoft ever choose to enter that business in earnest.

Obviousness is highly susceptible to changes in perspective, especially over five years' time. Today, with the launch of one of the company's most important gaming initiatives, still called "Project Natal," just months away, Bach has decided to leave the company, Microsoft confirmed this afternoon. Following in his wake will be Microsoft's other high-profile gaming executive, J Allard, who leaves behind a real personal triumph in the form of XNA, the gaming platform that may yet unite development for Xbox 360, Windows, Windows Phone, and to some extent Zune.

Ironically, it was the consolidation of the Entertainment & Devices division that has led to the development in recent years of the most innovative and head turning (if not yet entirely game changing) platforms Microsoft has produced in a good many years. XNA is one. Windows Phone 7 may very well be the first mobile platform ever to come out of Microsoft that deserves, at the very least, the attention it's received. And despite the fact that the Project Natal device looks like it could be a rejected candidate for the design of Marvin the Paranoid Android from the last Hitchhiker's Guide movie, the fact that it's injecting a new concept of user input into gaming development makes Xbox 360 once again a competitive platform.

So the mystery today is that Microsoft is bringing in a platform leader -- Corporate Vice President David Treadwell, formerly the head of Live Platform Services -- to report to Senior Vice President Don Mattrick, while Mattrick, who spearheaded Project Natal, will report directly to CEO Steve Ballmer. Andrew Lees, the Senior Vice President in charge of "mobile devices" but who led the development of Windows Phone 7, will retain his position but report directly to Ballmer as well.

It's a development that indicates that Microsoft realizes the importance of these assets as platforms, rather than as mere devices -- a realization made feasible by the work of Bach and Allard. And yet off they go to parts unknown.

Is there a message to be found in Microsoft's relocation of its gaming and mobile development units back to the platform side of the business? Matt Rosoff, who researches the consumer and online side of the company for the analysis firm Directions on Microsoft, thinks...not.

"I don't think it matters so much which division of the company Microsoft's mobile platform group is in," Rosoff told Betanews this afternoon. "After all, Windows Phone 7 is a very good step, and it was created when the mobile division was under Bach in E&D, and I tend to think smartphones are a consumer-driven purchase -- especially since the release of the iPhone. But maybe it's time to think of mobile OSs in the context of small form-factor computers, in which case it might make sense to move that group back to Windows. That's a hard call for Ballmer to make, which is probably why he's taking the reins for a while.

"The mobile space certainly has changed a lot in the last five years, hasn't it?" said Rosoff. "I don't think anybody at Microsoft (or many other places) would have predicted the iPhone and mainstreaming of smartphones and 'apps,' Google's successful entry into the space, or Palm's resurgence and acquisition by HP. Strategically, I think mobile is becoming far more important to Microsoft than it's ever been -- not only is there the opportunity of selling higher-margin software in tens of millions of devices per year, but there's also the threat to desktop Windows from inexpensive dedicated hardware running competing mobile OSs, such as Apple's iPad, HP's planned slates, and possible Android or Chrome devices."

Could the exit of two executives closely associated with Project Natal, and who are partly responsible for its creation -- an exit announced prior to the project's final unveiling -- indicate that perhaps it's not as big a deal as the entertainment device press made it out to be?

Rosoff sees a scenario where Natal infuses Xbox 360 with some of the "next generation" status that a full-scale successor to that console would have had, if Microsoft could afford to build one. So it's a stepping stone in one respect, and a paperweight in another: "Project Natal could keep the Xbox 360 an active platform for another few years. That's good because it helps Microsoft sell more games over the lifetime of each console so they can recover the initial costs of the hardware, and it delays the next generation of consoles, at which point they'll have to subsidize the hardware again (at least that's how it has worked with Sony, less so with Nintendo). So I don't think it was ever viewed as a major business in itself."

Should we read anything into the fact that Bach's and Allard's exit is aligned so closely with HP's acquisition of Palm, and the likelihood of a webOS-based HP tablet device as a result? Rosoff thinks not, pointing out that Allard was a principal designer of Windows Phone 7. In maintaining an advisory role, as Microsoft said today he would, Allard may prefer to retain ties to his own creation rather than let a competitor use him to help sink it.

On the other hand, Allard's "advisory role" could end up looking like the "advisory role" a TV show creator is bestowed by its executive producer after he's been fired. "There are lots of companies who would value Bach's and Allard's experience in this space," Matt Rosoff told Betanews. "Or, they might retire from the tech industry for good."

12 Responses to After two high-profile Microsoft exits, is WP7 a device or a platform?