Brick and Mortar retailers haven't quite figured out the perfect way to utilize location-based "check in" services like Foursquare, Gowalla, and Latitude, but mobile rewards app CardStar today presented a new option for retailers.

Retailers like Starbucks, Domino's Pizza, Chili's, Ann Taylor, and Sephora have all tried promotions where the people who check in most at their stores (the "mayors") get special coupons or prizes.

But so far, retailers have taken a rather erratic approach to utilizing location-based promotions, leaving it a market with still a lot of potential, but not a lot to show yet.

Forrester Research published a study this week which concluded that "most marketers should wait until they can get a bigger bang for their buck, when adoption rates increase and established players emerge from the fray."

Today, cross-platform mobile loyalty card app CardStar announced it has integrated Foursquare into the newest version of its iOS 4 app, combining rewards cards and location check-ins into a single app. The result could be something that helps big retailers emerge from this Location-based "fray." 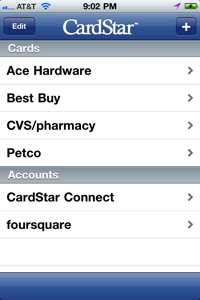 The premise of CardStar is simple. Rather than carry around all the loyalty cards that retailers give out, you either enter their numbers into CardStar or scan them with the phone's barcode scanner. The barcodes are then saved either in the user's phone, or in the cloud-based CardStar Connect account, and they can be called up when checking out at a store and scanned directly off of the phone's screen.

With the new Foursquare integration, users can also check into the store where they're shopping as they call up their rewards card. The first time a user does this, he doesn't really experience any significant reward to checking in. However, if it is a place he frequently visits, like his neighborhood grocery store, for example, the app can remember the area as a "favorite place," and automatically call up the appropriate rewards card whenever he's in that location.

For retailers, this app offers a lot of benefits. Not only are users advertising to their peers where they're shopping, but they're also giving the retailers another way to communicate with them. The latter is a mutually beneficial situation, because users who check into FourSquare at a particular location could, for example, have exclusive promotions sent directly to the CardStar app that other shoppers do not receive. 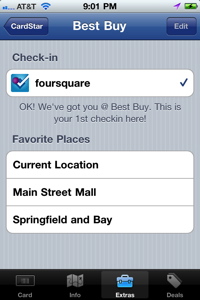 CardStar is available on iOS, Android, and BlackBerry, but the iOS version, released today in Apple's App Store, is currently the only one supporting Foursquare's open API. The other versions will be updated in the coming months.