My first brush with one of Microsoft's greats -- Bob Muglia 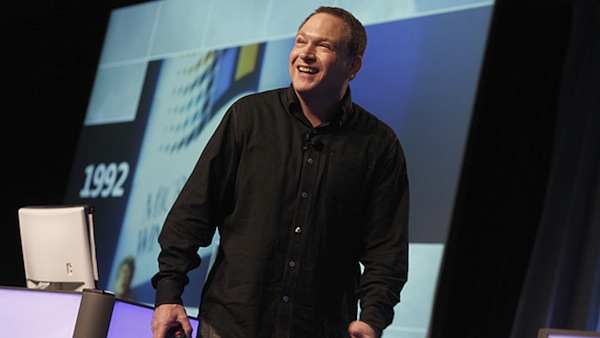 The end of the Bob Muglia era at Microsoft is a memory-rouser for us who have been in the business for a while. Muglia has served in important roles with important products for a long time, and I've worked with him on several. Which brings me to the first time I met him (cue harp strumming).

It was July 4, maybe July 3, 1992, the very first Windows Professional Developer Conference, at the Moscone, in San Francisco. Heady days they were, as I was Technical Director at PC Week Labs, and we were at the beginning of Will Zachman-PC Week fight which, if you don't remember it, consider yourself fortunate.

Microsoft was to release their first public code for "Win32" also known as "NT Technology" which they had been showing privately for some time. What they specifically released was called a Win32 Programming System or something like that and released on a stack of 3.5-inch floppies.

I arrived early in San Francisco and had three IBM Model P70 computers and networking hardware FedExed to my room at the St. Francis Hotel on Union Square; I still sigh at the thought of that hotel, which I loved, but haven't been inside for many years. The point was that I would get the code early and do the first hands-on test and put out the first story.

I was setting up my hardware when the code was delivered to my room by a young product manager on the effort, one Bob Muglia. He spent a lot of time telling me not to judge it like it was a finished product or even an end-user product. It's an early-access developer platform. Bob came back to the room a couple times over the next couple of days to work on stuff with me.

I got my testing and story done and called it "an operating system only a programmer could love." I thought of this as largely a compliment, since I'm a programmer and was writing mostly to programmers, but Muglia was unhappy. The line was cited by Pascal Zachary in his book without using my name.

Muglia and I were both right, I guess. Rolling out any new product, especially so strategic a platform as Win32, is in large part about managing expectations. In the context of 1992, you could see the potential of Win32 to result in really sophisticated systems, greatly improving on the garbage we were all running at the time. In fact, with Windows 7 and Server 2008, Microsoft may actually have met its goal for Win32: operating systems with power and broad reach -- and people genuinely seem to like them.

As Joe Wilcox's "End of an era" post indicates, Microsoft's Server and Tools Business is an industry monster. If you go around American businesses (probably abroad, too), it's rare to find companies not deeply committed to STB's products, not to mention the rest of the ISV, IHV, training, consulting and publishing ecosystem. That all happened with Bob around and a lot of it with him in charge.

Don't weep for Bob Muglia. Even if there's a slight here [from Microsoft], I'm sure he's well off and has a thousand Microsoft partner companies begging him to come take charge -- but only once he has done "onboarding" his replacement, whatever the hell that means.