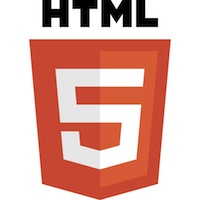 I'm not doing cartwheels over the new HTML5 logo, which reminds me of a superhero badge. It's bold, masculine and sort of orange, which will appeal how to the majority of web users? But the logo is a great idea, and it's big splash promotion -- some of that from Microsoft -- is exactly what the standard-in-progress needs right now.

Today in a blog post, Jean Paoli, Microsoft's general manager of interoperability, writes: "The logo links back to W3C, the place for authoritative information on HTML5, including specs and test cases. It's time to tell the world that HTML5 is ready to be adopted."

There's a strange appropriateness to Microsoft promoting the logo's use. It's what the company did in the late 1990s to promote Internet Explorer. During the so-called browser wars between Microsoft and Netscape, each side adopted proprietary tags not necessarily supported in the other's browser. Microsoft encouraged websites supporting Internet Explorer to put up an IE logo/badge -- to be proud, to proclaim their support. As a marketing mechanism, the logo branding was brilliant and quite uncommon.

I remember interviewing Sun cofounder and then chief executive Scott McNealy in his office about Java; some time in 1997. McNealy, an avid amateur hockey player, limped from an injury on the ice from the night before. I scolded McNealy, calling him a boy who cried wolf, for making promise after promise after promise about Java -- like powering light switches -- that never came to be. He didn't get upset at that but my accusations about Java branding. I observed that Internet Explorer logos were on tens of thousands of websites, while Java was seemingly nowhere. If developers are using Java, why are they keeping a secret, I accused. McNealy responded by pointing across the room at his Java terminal and the tiny logo on the side. He blamed his marketers for not listening.

Someone listened, or observed -- that is Microsoft's browser, and the logo program was one reason. The US Justice Department painted a black-and-white case about Microsoft triumphing over Netscape during the browser wars. Simply stated: Microsoft abused its monopoly position in desktop operating systems to gain dominance in the adjacent browser market. I don't agree with that simplistic portrayal. Microsoft's success was about more than integrating the browser into the operating system. Microsoft also made huge investments in developer programs and branding and marketing efforts. The logo program was among them.

I'm not asserting that developers and downloaders adopted IE over Netscape simply because of a logo program. That said, no one should misunderstand the influence a well-placed logo can have. Take for example TV networks, which not long after the browser wars, started putting their logos in the lower right-hand side of the screen. It's about brand recognition and in some ways territory marking -- the network asserting: "This is my content."

On the web, the logo means something more. If the popular sites support Internet Explorer there must be a reason for that. People take social cues from one another all the time, about the clothes other people where, the cars they drive, the jewelry they wear and in the 2010s which smartphones they carry (and what apps are on them). In the late 1990s, pervasive IE logos indicated that Internet Explorer was the happening browser -- to developers and web surfers.

The HTML5 logo is even more significant, and its usage communicates that the standard is ready enough to adopt. More web developers will support HTML5 as they see others doing so. Microsoft's support communicates something, too. Right now, IE has a reputation for being a non-standards browser, mainly because of persistent IE6 usage and the still-supported ActiveX plug-in architecture. Large businesses are among the biggest consumers of ActiveX, which holds back the browser's future development (backwards compatibility is a Microsoft customer priority). Microsoft's loud support for HTML5 and now its logo communicates to legacy customers and developers that the future is something else. It's one thing for Google to call for HTML5 support, and something all together different for Microsoft -- the company with the perpetual Internet Explorer standards non-compliance black eye -- to do so.

The logo is important, as is Microsoft's promoting it. Paoli and I agree. He writes: "As developer and site owners see this logo across the web, we hope it will signal that while there is still a lot of work to do until all the HTML5 technologies are ready, real sites are starting to take advantage of them today."

21 Responses to Microsoft's pitch for HTML5 logo has familiar ring