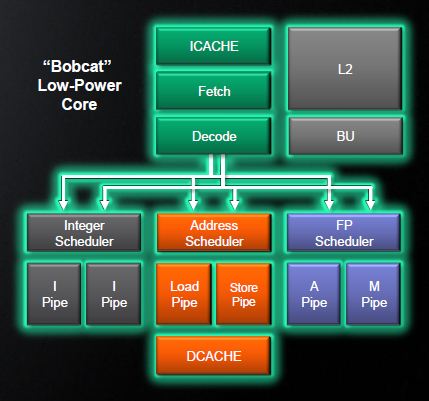 AMD Wednesday unveiled the newest member of its Fusion APU family called the G-Series, designed for use in embedded environments, and primed to be the eventual replacement to the long-running Geode line of embedded processors.

Like the Fusion APUs for consumer PCs that AMD unveiled just prior to CES 2011, the G-Series incorporates an x86 CPU with a DirectX 11 capable GPU and an integrated DDR3 memory controller all on the same die.

These, however, are based upon the "Bobcat" low-power CPU, which can be configured with single or dual cores with either a 9 Watt or an 18 Watt TDP and speeds up to 1.6 GHz with 1MB L2 cache. The GPU core can be configured in one of two performance settings, and includes a dedicated graphics memory controller, 2D and 3D acceleration, OpenCL 1.1 support, OpenGL 3.2 and 2.1 support, dedicated hardware for H.263 and MPEG2 decode.

AMD has about ten different markets it serves with its embedded processors: thin clients, POS and kiosk systems, digital signage, game machines, medical imaging, single board computing, industrial controls, SMB-to-enterprise grade storage, ruggedized/military systems, and telecommunications/networking. Those markets used to be served by AMD's Geode line, but AMD ceased development on Geode back in 2006 and plans to sunset the chips by 2015. But as Geode fades away, AMD expects the G-Series to witness a 350% growth in 64-bit embedded computing in the next five years.

AMD may anticipate such dramatic growth because it is launching the G-Series APU with more partners than its embedded platforms have ever launched with before: Advansus, Compulab, Congatec, Fujitsu, Haier, iEi, Kontron, Mitec, Quixant, Sintrones, Starnet, WebDT, Wyse and others are expected to launch their G-series solutions in the next few weeks. Their products will include casino games, digital signs, and PC-compatible connected set top boxes, to name just a few.