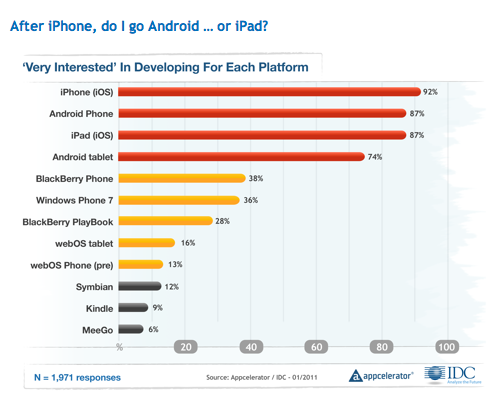 What do application developers really care about? That's the question IDC seeks to answer with a new report released today based on a survey of 2,235 application developers conducted between January 10-12. "The survey reveals how new entrants to the tablet market are changing application development priorities and how businesses large and small are accelerating their efforts to build a mobile application strategy to deal with an explosion in apps, mobile devices, operating systems, and capabilities," according to the report.

The clincher: "Google has nearly caught up to Apple in smartphone popularity and is closing the gap in tablets." Read that sentence a second time and let the implications sink in and think about what it ultimately means for all the seemingly endless rah rahs for Apple's iOS.

To date, 85 new iPad competitors are lined up against iPad -- most of them were announced during Consumer Electronics Show 2011. "Developers are pushing these devices to the top of their priority list," according to IDC. The research firm conducted its last survey in September when 84 percent of respondents said they were "very interested" in developing for iPad and 62 percent for Android. Post-CES, iPad interest rose just three points, while Android jumped to 74 percent. Interest in BlackBerry PlayBook and WebOS tablets: 28 percent and 16 percent, respectively.

"With the Android Tablet market set to explode this year and the recent success of Samsung's Android-based Galaxy Tab, 57 percent of developers say price will be the most important factor for success, followed by minimized fragmentation (49 percent) and then Android Honeycomb OS capabilities (33 percent)," according to the report.

"From Samsung to Motorola to HTC to LG to Toshiba and countless others, if you add up the market capitalization supporting these new devices and look at the fundamental problem of how these players can truly differentiate, the biggest variable that will have the most impact (at least in the near-term) is price," according to IDC. "Developers eye the enticing possibility of a sub-$100 tablet and think mass-consumer opportunity."

After iPhone, Develop for Android or iPad?

Among mobile phone platforms, iPhone leads with 92 percent of developers "very interested." However Android interest rose 5 points to 87 percent. IDC observed "a common refrain: after iPhone, do I go Android or iPad?" It's an interesting question considering that upscaling apps for iPad should conceptually be easier than porting to Android. "Our common recommendation for pure market share and design reuse, think Android. For enhancing the experience, go iPad," according to IDC.

Windows 7 Phone's better-than-expected launch -- and c`mon who can resist those clever TV commercials -- drove up developer interest by 8 points to 36 percent.

Eighty-two percent of developers are "very interested" in developing for the Android Marketplace -- 37 percent for the competing Amazon Appstore.

In many ways, 2011 is queuing up to be the year of the mobile, with tablets being a driving catalyst. "Last year, most respondents (44 percent) said they were in the exploration phase of their mobile strategy," according to IDC. "A simple app or two -- typically on iPhone -- and a focus on free brand-affinity apps was standard practice. This year, 55 percent of respondents said they are now shifting into the 'acceleration' phase." What does that mean?

The number of apps developers plan to create is up 183 percent from the last survey to 6.5 this year. For the loud rabble trumpeting iOS as the end-all, be-all mobile platform, developers are hedging their bets. "On average, respondents said they plan to deploy apps on at least 4 different devices (eg: iPhone, iPad, Android phone, Android tablet) this year, up two-fold over 2010," according IDC. "'I need my iPhone app' was a common phrase in 2010. No more. Cross-platform is mandatory, as is deploying to multiple form factors like tablets."

A surprising trend: 81 percent of respondents say their businesses are taking mobile apps development in house. "Increasingly, integrated web and mobile teams are becoming responsible for a company's mobile strategy in order to have complete control over campaigns that span websites, Facebook pages, and mobile devices," the report states.

Cloud connectivity is a huge priority. "Last year, 64 percent of businesses said that they connected their applications to the cloud," according to the IDC report. "This year, that number jumps to 87 percent." The cloud shift also brings a new applications model, from tiered to distributed. The newer model is better for making information and data available anytime, anywhere and on anything.