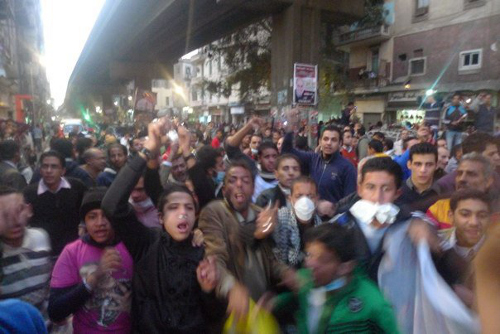 Responding to widespread civil unrest, the government of Egypt on Thursday evening ordered all private network operators to shut down their services, both wired and wireless.

At around 12:30am local time, Egypt's outbound connections to the Internet hit a brick wall, and fell approximately 80%. Both BGP Mon and Renesys observed similar withdrawals of Border Gateway Protocol (BGP) routes in Egypt.

A statement from Vodafone, the British telecommunications company responsible for one of Egypt's three major cellular networks, said all mobile operators, likewise, were instructed to suspend service in areas where anti-government protests were taking place.

"Under Egyptian legislation, the authorities have the right to issue such an order and we are obliged to comply with it. The Egyptian authorities will be clarifying the situation in due course," Vodafone's statement said on Friday.

More than 24 hours later, the communications blackout was still in effect.

"I have been able to connect with my family through landlines only, as the cell phones and internet were turned off," Dr. Ibrahim Karim, Montreal-based Author and alternative medicine researcher told us today. "[It] is really frustrating everybody."

There is only one landline telephone company in Egypt, Telecom Egypt, which is controlled by the government.

The blockage was done to thwart seditionaries and protestors who had been using social media outlets to organize activities and share information about the uprising with the outside world.

White House Press Seceretary Robert Gibbs said the Egyptian government "must respect the rights of the Egyptian people, and turn on social networking and Internet." This sentiment was later echoed at a press briefing by Seceretary of State Hillary Clinton.

According to 2010 estimates from Internet World Statistics, Egypt is the second most-connected African country with 17,060,000 internet users and an estimated 4,077,520 Facebook users.

Though it's the sixteenth most populous nation in the world (80.47 million population) this level of connectivity is disproportionately low. Germany, which is Egypt's nearest neighbor in terms of population with 82.2 million residents, has 65 million connected citizens or a staggering 80 percent. Vietnam, a country with 89.5 million residents, had 24.26 million Internet-connected citizens, or 27 percent. Only about 21% of Egypt's population is connected.

So even though only a small proportion of the Egyptian population uses the Internet in any fashion, and an even smaller fragment used it to share information about anti-government protests, the effect it has had on the news flow has been staggering.

Slowly, however, the nation found ways to reconnect.

Activist group We Rebuild reportedly began providing Egyptian citizens dial-up numbers so they could connect to the Web over the copper infrastructure still available to them.

Secretary-General of the International Telecommunications Union, Dr. Hamadoun Touré, issued a statement Saturday advocating the move: "ITU is a champion of the world's right to communicate. We believe this is a basic human right. We actively encourage all stakeholders -- governments, corporations, citizens -- to do everything in their power to keep the lines of communication open."

Vodafone on Saturday put out another statement, saying it was able to restore voice services as soon as it was allowed.

"We would like to make it clear that the authorities in Egypt have the technical capability to close our network, and if they had done so it would have taken much longer to restore services to our customers," the company's statement said. "It has been clear to us that there were no legal or practical options open to Vodafone, or any of the mobile operators in Egypt, but to comply with the demands of the authorities. Moreover, our other priority is the safety of our employees and any actions we take in Egypt will be judged in light of their continuing wellbeing."