Google makes it easier to build sites for Google TV 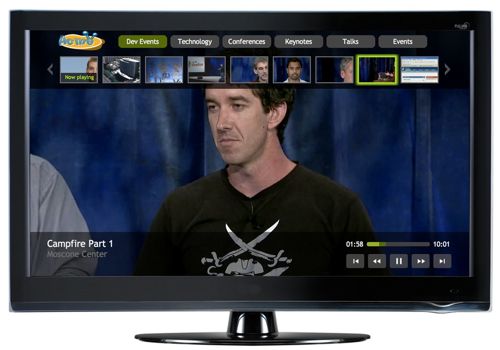 Friday, the Google TV team published a couple of new design templates, as well as a still-in-beta Web UI library that Web designers can use to optimize their sites for Google TV.

"While existing websites can be displayed in Google TV, the user experience isn't always ideal within the context of a living room," Steve Hines and Daniels Lee of Google TV Developer Relations Team wrote in the Google TV blog today.

Blockage of such "less-than-ideal" sites could actually have been what caused Google TV to have such a disappointing launch in the first place.

Within the first month of the service's availability on the Logitech Revue set top box, ABC, NBC, CBS, Fox, and Viacom all made their websites unavailable to Google TV. The idea was that this would limit users' access to only the sites that the content providers designed specifically for Google TV.

Either way, if you're a Web designer, you now have some easy tools to rebuild your video site with a pre-made "10-foot UI" for Google TV. All of the templates are open sourced under the Apache 2 license, and they support sites that utilize HTML5, JavaScript, CSS and Flash.

The templates require that you have the Adobe Flex 4.5 SDK installed in your IDE, and the Flash 10.2 plugin for browser-based testing.

They can be downloaded now from the Google TV developer resource page.