What goes around comes around, and Microsoft proved the point by filing an antitrust complaint against Google. I'm not so much surprised by Microsoft's action but why it took so long. Google dogged Microsoft with European trustbusters for years, now it's tit-for-tat time.

Microsoft "decided to join a large and growing number of companies registering their concerns about the European search market," Brad Smith, general counsel, writes in a blog post today. "By the European Commission's own reckoning, Google has about 95 percent of the search market in Europe." Say, doesn't that figure sound familiar -- like Windows on x86-based PCs when U.S. trustbusters targeted Microsoft in the late 1990s?

In February 2009, I posted analysis: "Google's EU gambit is stupid," warning that the search giant's cooperation with European trustbusters against Microsoft would come back to bite its arse. The European Competition Commission was investigating Microsoft's bundling -- in legal parlance, tying -- Internet Explorer with Windows.

"Google is setting itself up for a big fall by gunning for Microsoft this way," I explained. "The search giant is engaging in competition by litigation with a governmental organization that has no legal or public mandate to reciprocate anything. In fact, Google is likely to be investigated by the European Commission some time in the near future. Google's search share, which is higher in many European countries than in the United States, is reason enough for the EC to open an antitrust investigation. It's not a matter of if but when."

That investigation did come. After months of preliminary review, the European Commission made it official on Nov. 30, 2010. Google's in the outhouse now, and in the way I predicted in February 2009: "I find it strange that Google wants to participate in a remedy process about tying...The arguments Google would make about bundling could be later used by the European Commission against the search giant. Apparently, somebody at Google believes participation is worth the risk."

So comes Microsoft's payback. "Google has engaged in a broadening pattern of walling off access to content and data that competitors need to provide search results to consumers and to attract advertisers," Smith accuses. His examples are very much about Google tying search to other products or services, preventing competitors access in the process. There is irony here since Microsoft faced similar accusations of blocking competitors, too, in U.S. and European antitrust cases. 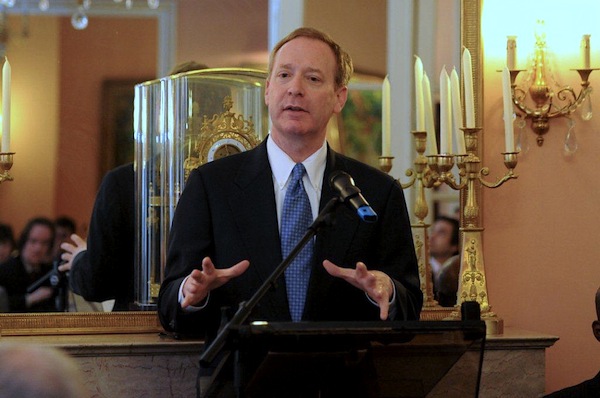 Regarding YouTube, Smith alleges that Google has put in place "a growing number of technical measures to restrict competing search engines from properly accessing it for their search results. Without proper access to YouTube, Bing and other search engines cannot stand with Google on an equal footing in returning search results with links to YouTube videos and that, of course, drives more users away from competitors and to Google."

It's a smart example. Google is the No. 1 search destination in most markets, while YouTube is the top video site/service. In the United States, YouTube would rank third, based on search share, if counted alongside Google and Bing. Microsoft essentially argues that Google has tied together the two services to control search access and to extend Google's monopoly from one market to another -- that's exactly the kind of behavior the EC would want to prevent and Microsoft should point out. U.S. trustbusters have called this kind of duopoly the "applications barrier to entry" that effectively shuts out competition, thus harming consumers.

Smith gives other examples, alleging that Microsoft can't offer a good YouTube experience on smartphones, because "Google has refused to allow Microsoft's new Windows Phones to access this YouTube metadata in the same way that Android phones and iPhones do." There's another tying accusation with punch. Google's mobile operating system is growing gangbusters -- 888.8 percent year over year globally in 2010, according to Gartner. IDC predicts that Android will have about 40 percent smartphone OS market share globally this year.

"Google has enabled its own Android phones to access YouTube so that users can search for video categories, find favorites, see ratings, and so forth in the rich user interfaces offered by those phones. It's done the same thing for the iPhones offered by Apple, which doesn't offer a competing search service," Smith writes. "As a result, Microsoft's YouTube 'app' on Windows Phones is basically just a browser displaying YouTube's mobile website, without the rich functionality offered on competing phones."

I'm surprised European trustbusters took so long to begin a formal Google investigation. In December 2007, I blogged: "The Google Monopoly begins," asserting that "Google is becoming the new Microsoft, only much worse." I re-articulated and expanded the reasons with February 2010 post "Google is a dangerous monopoly -- more than Microsoft ever was." The clincher: December 2010 post "I sold my soul to Google, can I get it back?"

Google has long used U.S. and European antitrust oversight or investigations to stick it to Microsoft. Another example: In 2007, Microsoft agreed to change how search works in Windows Vista, following a Google complaint to US trustbusters. Now it's Microsoft's turn at the bat.

"Having spent more than a decade wearing the shoe on the other foot with the European Commission, the filing of a formal antitrust complaint is not something we take lightly," Smith writes. "This is the first time Microsoft Corporation has ever taken this step."

Payback's a bitch, Google. Get used to it.

21 Responses to Hey, Google, Microsoft payback is a bitch