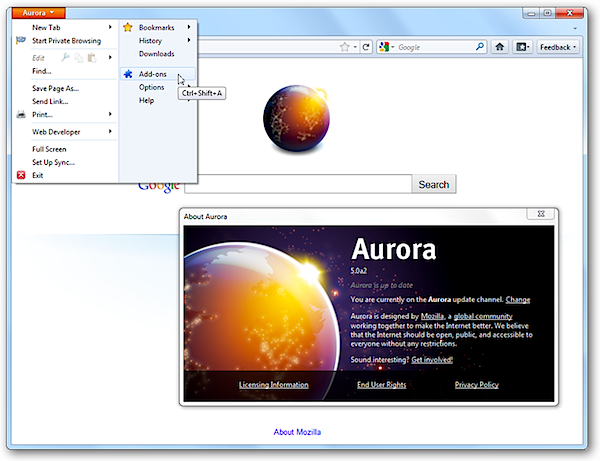 The Mozilla Foundation has released a new alpha build of its open-source browser. Firefox Aurora, currently at version 5.0a2, is designed to represent the first public glimpse of future versions of Firefox in an early, unstable form.

The release of Aurora coincides with Mozilla's announcement of its new rapid release development cycle, which brings it into line with rival browsers like Google's Chrome. Having taken two years to deliver Firefox 4, Mozilla aims to release versions 5, 6 and 7 by the end of the year.

The new development cycle basically introduces a fourth release into the schedule. Nightly builds are private and shared only with developers. Previously, these nightly builds (codenamed Minefield) would slowly make their way to the Beta channel before eventually migrating to final release. In order to speed up testing and development, a new alpha channel,Firefox Aurora, has been made available to the public to get an early glimpse into the latest changes under development.

Each version of Firefox, starting with version 5, will spend six weeks in development under the Aurora banner. It's expected that versions of Aurora at the beginning of the six-week cycle will naturally be more unstable than those at the end, prior to migrating to the beta channel for a further six-week cycle prior to the final release. Once a release has migrated from Aurora to Firefox Beta, Aurora will move on to the next version number, synchronizing with the latest nightly build at that point in time.

It's worth noting that Mozilla's own roadmap for Firefox 5 estimates a June 21 release date for the next version of the browser, which means its development cycle has been compressed from 18 weeks to just 13. Starting with Firefox 6, however, the roadmap will revert to the planned six-week cycle for each stage of a version's development.

Firefox Aurora can be differentiated from later beta and stable versions of Firefox by the use of Aurora instead of Firefox at key points in the user interface (such as the Firefox button in Windows and Linux). It will also sport its own dedicated logo. Unlike Chrome, it's technically possible to run Aurora alongside the beta or stable version of Firefox, although both programs will share add-ons and preferences, which could cause problems further down the line. In our quick tests, however, the most annoying facet of running both side-by-side was the fact an add-on's compatibility check was performed each time we switched from one to the other.

At the present time, there are no noteworthy new features in Firefox Aurora 5.0a2, although Mozilla claims it does include several performance, security and stability improvements. Firefox Aurora 5.0a2 is available as a free download for Windows, Mac and Linux platforms, and like Firefox is open source.

Get more great applications news like this at Software Crew.