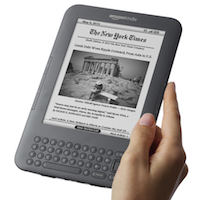 Amazon on Wednesday announced Kindle Library Lending, a program that will let Kindle users borrow books from more than 11,000 libraries in the United States. The program follows Amazon's person-to-person Kindle Book Lending feature that debuted at the end of 2010 and addresses long-running concerns that e-readers like the Kindle would bypass libraries entirely.

In the program, users will be able to check out Kindle books from their local library, and then add notes and highlights which are synced to the user's Kindle account. If the book is re-rented or purchased, all the annotations and highlighted passages are retained. They do not pass from user to user.

While the OverDrive lending experience can already be had on mobile and desktop devices, this will be the first time the platform has extended directly onto a dedicated e-reader.

Sony, meanwhile, has been slowly building its Reader Library Program, which launched last year to, in the words of Sony Reader Vice President Phil Lubell "provide librarians with additional resources, enabling them to inform and demonstrate to patrons how to benefit from their growing eBook collections."

2 Responses to Amazon Kindle to get Public Library borrowing feature