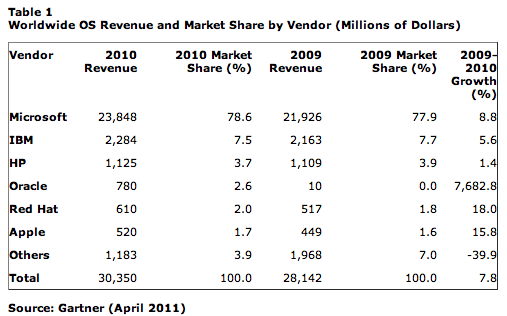 That's not just PCs but servers, too.

Today Gartner offered a refreshing perspective on operating systems, carving up the market by revenue share rather than units. By that measure, Windows combined PC and server OS share was 78.6 percent in 2010, up 8 percent year over year. While Windows' lead is commanding, Mac OS is growing faster, up 15.8 percent to $520 million in revenue. But the king of growth is Oracle, which share rose 7,683 percent from $10 million to $780 million year over year. Oracle catapulted from ninth to fourth place and ahead of fifth-ranked Apple, mainly from its April 2009 Sun Microsystems acquisition and Solaris with it.

More broadly, PC and server OS revenue grew 7.9 percent between 2009 and 2010 to $30.4 billion. "Generally, client OSes outperformed server OSes and grew 9.3 percent in 2010, while the server OS segment grew 5.7 percent," Matthew Cheung, Gartner principal research analyst, says in a statement. "The long-pending demand for PC refreshment was unleashed as the economy stepped out from the economic turndown, which drove growth of client OSes."

Then there is the Windows 7 factor. In the 18 months since the operating system shipped, Microsoft sold 350 million licenses, the company revealed last week. As much as 80 percent of the install base was on XP when Windows 7 shipped, so there was tremendous bent-up demand, particularly among businesses. Windows client revenue grew 9.2 percent year over year, while its server counterpart grew by 7.5 percent, according to Gartner.

IBM ranked a far distant second behind Microsoft, with $2.29 billion and $23.85 billion revenues, respectively. That's right, IBM's OS revenue was less than 10 percent of Microsoft's last year. What a difference a couple of decades makes, eh?

I wondered how the firm calculates Mac OS revenue, since the majority likely is from computer sales. Cheung responded by email from Hong Kong. "The Mac OS number is a Gartner estimate, but we have communicated with Apple for the number," he explains. "Apple doesn't publish the OS number, but there is a software number in their public financials. OS number is a fraction of the software number. We also have collated the number with Mac unit shipments and reconciled the number with an estimated ASP [average-selling price] of other client-based OSes (e.g. Windows).

"Piracy impacted Windows revenue, particularly in emerging markets such as China and India," Cheung responds. "We believe China and India have piracy rates at 80 percent and 60 percent, respectively. Eighty percent of Microsoft Client business comes from PC OEMs -- and the rest, 20 percent retail business, is more piracy-vulnerable...We believe Microsoft can earn 20 percent to 25 percent more if there is only 'systematic piracy' in the world." That doesn't mean no piracy but low piracy -- around the 20 percent here in the United States.

Editor's Note: This news story was originally posted at 5:02 p.m. ET on April 27, 2011, and later updated with Gartner analyst comments.