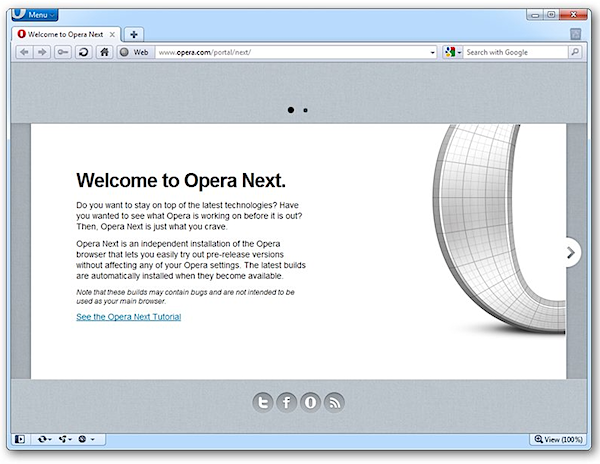 Opera has released an alpha build of Opera Next 11.50. As the name implies, this new release is a separate version of the cross-platform Opera browser. It's designed to allow users to install the latest developmental version of Opera alongside the current stable version, allowing users to road-test the latest new features without risking their current, stable installation.

Aside from introducing the Opera Next browser, which is identified by a silver grey version of the traditional red "O" icon used by Opera, version 11.50 also adds support for Speed Dial extensions, allowing developers to do more with the Speed Dial shortcuts page in Opera itself, such as delivering live news feeds, page updates or animated video in place of the static web page image or site icon.

Opera Next will automatically update as soon as the latest developmental builds are released. It's designed to let users road-test new features while still being able to fall back to the latest stable version of Opera should problems be encountered. The reasoning is that bugs and other problems will be more quickly identified, reported, fixed and ultimately delivered by future developmental builds.

Opera Next 11.50 alpha is available now for Windows, Mac and Linux platforms, and is freeware. It's designed to be installed alongside the latest stable build, currently 11.10, of Opera, which will boost the number of people acting as beta testers for Opera. However, less experienced users may wish to think twice before doing so, as with all pre-release software.