If Google hasn't killed the yellow pages yet, Seattle law could 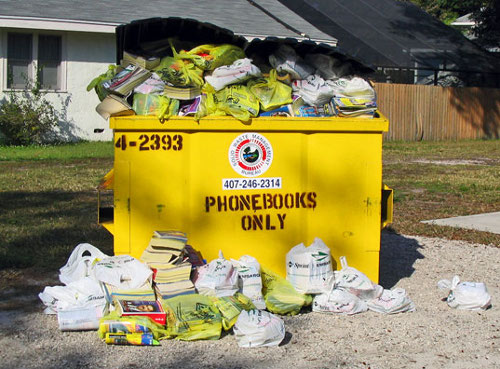 Commercial "yellow pages" phone books are almost totally irrelevant to anyone with a search engine at their fingertips, yet they are still made and distributed on a massive scale.

Late last year, the city of Seattle Washington passed a city ordinance that would allow residents to opt out of receiving bulky yellow pages phonebooks. Under the ordinance, publishers would be fined up to $125 per phonebook that they delivered to residents who had opted out. On April first of this year, Seattle made it illegal to distribute yellow pages phone books without a government license.

"We heard from hundreds of people who are frustrated with the system of receiving multiple phone books every year and requested a reliable way to stop the waste. This is it," city Councilmember Mike O'Brien, sponsor of the opt-out legislation, said yesterday. "The new system provides real accountability -- phone book companies must to comply with peoples' choices or face penalties."

Dex One, the city's largest yellow pages distributor, has been disputing the ordinance since last year in Seattle district courts. Yesterday, the company filed a motion for a temporary restraining order against the opt-out registry.

"The fee and opt-out registry also lack the required 'fit' because they single out yellow pages even though Seattle residents receive many other publications --from junk mail to nightclub leaflets to free neighborhood newspapers-- that some citizens do not want, and that impose recycling costs or supposed 'privacy intrusions,'" Dex One complained. "In short, allowing the Ordinance to take effect will bring little or no benefit, but will unquestionably burden speech."

9 Responses to If Google hasn't killed the yellow pages yet, Seattle law could