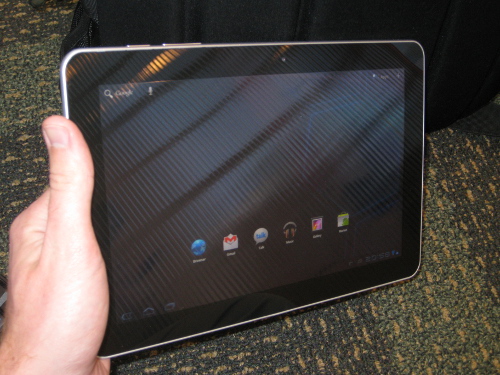 For the last three years, Google has given away pretty desirable free gifts to attendees of the Google I/O developer conference, and this year is no exception. The more than 5,000 attendees this year received a limited edition 10.1" Samsung Galaxy Tab.

This is the same device that Samsung unveiled last month at the CTIA conference, but left untouchable under plexiglass shields. Now, a handful of people have access to the device before it is released on June 8th and that includes Betanews.

The slim Galaxy Tab feels very much like the iPad 2 in terms of weight and size, but is meant to be oriented in landscape mode, fundamentally changing the way it is held and interacted with. Out of the box, it's equipped with Android 3.0.1 (Honeycomb), and the dual 1GHz core processor handles it quickly and nicely.

Like Samsung's other Galaxy devices, the 1280 x 800 screen is bright and beautiful and a major, major strong point for the 10.1. The back side of the device is adorned with an I/O custom Android theme, but on production models is likely to be in solid black or white.

All in all, it is an extremely high quality piece of Android hardware, and it promises to have an exciting future with the release of Honeycomb 3.1 and HSPA+ connectivity with the carrier-subsidized 3G model (this version is Wi-Fi only).