There were enough leaks in Google's streaming music plans to sink Titanic. So it was no surprise that earlier today at Google I/O, the search and information giant launched a cloud locker for your tunes. Well, for the tunes of special invitees (I/O attendees for starters) or Motorola XOOM tablet owners (the music app is included with Android 3.1). It's a closed beta. You can't attend I/O now if not registered, but you could still buy XOOM to get beta access -- that's if your domicile is the United States. The beta's only open here.

Keeping with Google's mindless marketing approach to nomenclature -- with Android and Chrome being two of the few exceptions -- for now the service is called Music Beta by Google, presumably Google Music on release. If someone got paid to develop the brand, please tell me how to get such an easy cash-producing gig. If Music Beta by Google is the product name, seriously I want the brander's job. That said, I must concede Music Beta by Google does evoke a sense of exclusivity fitting with the invitee or XOOM "Honeycomb early adopter" status.

Google Apps, Maps, News, etc. etc.-- they all begin with Google, like a major rival's products all start with Microsoft. It's how engineers think. Describe what it is rather than create a brand name that stands out from the crowd. Of course, Microsoft got away with Outlook, Windows and Word, which are about as generic as granny's heart pills. So, what's really in a name? 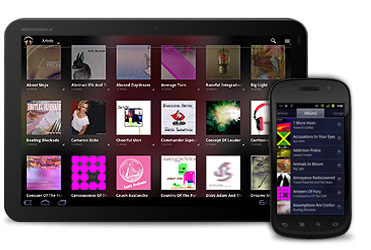 Behind this name is something similar to Amazon Cloud Player and Cloud Storage. Lucky Google Music beta participants can upload their tunes and stream down to a variety of devices (see video above). You can bet that like Picasa Web, presentation and synchronization will be tight on devices running Android. Sync is really the killer feature here. As I've written so many times: "Sync is the natural killer application for the connected world." Google cloud sync beats the pants off everyone.

For example, what happens when there's no Internet connection? No Google Music, right? Wrong. Android phones locally cache the most-recently streamed songs. They're there for you, baby, even when the Net abandons you.

In the video above, Googler Chris (no last name is given) says "music is seamless across my devices." Playlists automatically sync among computers, Honeycomb tablets or Android smartphones. "Everything is always kept in sync, instantly, with no cables," he claims. 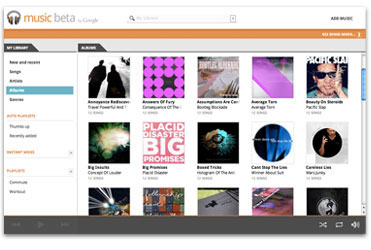 OK, I may whine about naming, but the seamless sync approach is brilliant. Kudos to Google for again taking the right approach to sync. Why is no one else imitating this? Duh. Google Music also has an "instant mix" feature that suggests tunes based on the selected track. It's not innovation exactly, worthwhile if it works.

Google also does something so simple and straightforward it's shocking. Amazon offers its users 5GB storage (20GB really after nearly free upgrade). What exactly does that mean to granny when she wants to upload her Beatles' and Elvis collections? Google Music is 20,000 songs. No friggin' gigabytes to figure out.

Now I've got to wonder if there are restrictions, because this is potentially one helluva lot of storage. My music library has 12,000 tracks, which consumes 92.75GB of storage. That's way too much for Amazon's cloud music service, but not  Google's. So I've got to wonder: Is there any downsampling during the upload to conserve storage and optimize the downstream? If not, hell, I'd re-rip all my CDs as lossless and let Google bear the load. Rip, upload and listen lossless, baby.

20 Responses to Want Google Music? You could buy XOOM