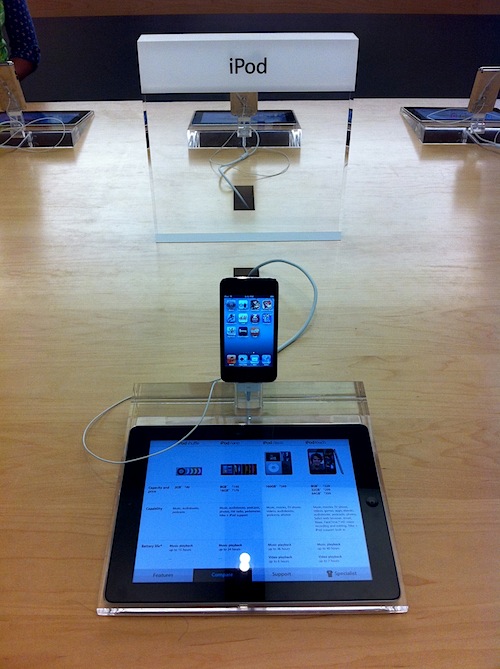 The retail experience looks nothing like the rumors, and certainly not two dot oh. But it's two dot something. The shopping experience is different, for sure. Basically, every product in Apple Store now has its own iPad bearing additional information, interactively. The paper placards are gone. I thought Apple couldn't make enough iPad 2s to sell, so why fill more than 300 stores with them? Say, won't the iPads get kind of hot under their plexiglass enclosures?

My teenage daughter and I trucked down to Fashion Valley Mall here in San Diego early this evening to shop for my wife's birthday, which gave me chance to look inside the Apple Store. After weeks of rumors, supposition and innuendo, Apple launched its new retail experience today. Several Mac sites had dubbed the retail makeover Apple Store 2.0. I saw sales associates carting around iPads, and then there were the aforementioned iPads beneath every product in the store (as you can see from the photos above and below).

The iPads are responsive. Shoppers can touch them to get additional information. Retail is all about touch. People examine objects they desire as much with their hands as their eyes. Shoppers first look, and then they touch. The new iPad stations let people not only touch the products they desire but use touch to get more information. There's sense to the tactile approach.

The iPad stations also serve a huge functional purpose. Have you been in an Apple Store recently? The shops used to be fun places to hang out and buy stuff. Now they're too busy. You have to worm your way around the bodies. And the cacophony! Surely the noise levels violate some local civil codes. I'm surprised tree huggers don't picket Apple stores for all the noise pollution. Oh, right. They're probably inside shopping.

Now instead of monopolizing sales associates with stupid questions ("If I buy a Mac, can I still use Google Maps?"), shoppers can get more information for themselves. It's a revolution in retailing! (Yes, I am being a bit sarcastic.) Seriously, there's something to providing a means for shoppers to interactively get the information they need about a product, right there where they can see and touch it. They also can compare products, which is sensible.

None of this lets the sales associates off the hook. Shoppers can use the iPads to call for a sales assistance. The approach has three obvious benefits (surely there are others I'll think of on a work day):

I've got to wonder. Will there some day be an Apple employee disorder -- a Pavlovian complex -- from being repeatedly summoned to the iPad stations? I didn't hang around the store to see if there was some tone or other indicator that got sales associates moving from one location to another. But what long-term effects will come from repeatedly being summoned this way? ;-)

Another question: Will the iPad stations cause congestion? It seems to me that more shoppers might spend more time with a product, as they tap away product pages on the iPad. There's not much that frustrates people more than waiting in lines. On the other hand, if the people tap, tap, tapping away tend to be more serious shoppers -- and they drive away lookers and touchers -- Apple might be better off long term, in terms of real sales and customer satisfaction.

Have you been in an Apple Store since the changes were introduced? Please share your reaction in comments. I spent about 10 minutes in the store, which was just enough time for scant observations and to snap some photos.