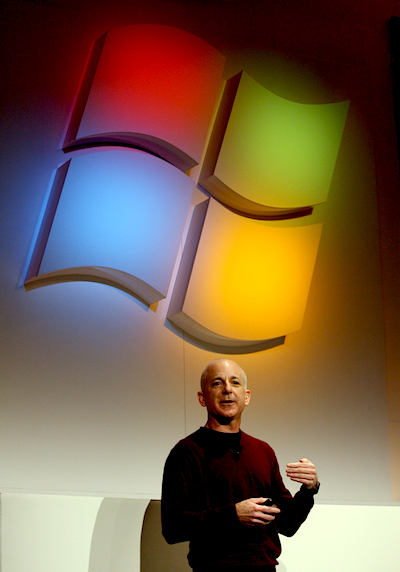 Just eight days before the D9 conference kicks off in Rancho Palo Verdes, Calif., Steven Sinofsky, Microsoft Windows & Windows Live president, has agreed to participate. Talk about booking gigs at the last minute. Speakers for a conference of this calibre typically book many months in advance. Could it be Sinofsky has something important to say about Windows 8?

Microsoft already is gearing up for the operating system's launch. Today, in remarks made during the Microsoft Developer Forum in Tokyo, CEO Steve Ballmer described the next version as "Windows 8." Ballmer told attendees: "As we look forward to the next generation of Windows systems, which will come out next year, there's a whole lot more coming. As we progress through the year, you ought to expect to hear a lot about Windows 8. Windows 8 slates, tablets, PCs, a variety of different form factors."

Three years ago, at D6, Microsoft gave the first big sneak peak of Windows 7. Given that Microsoft is now on a 3 to 3.5 year development cycle for Windows, timing is about right for a splashy Windows 8 debut -- that and today's Ballmer confirmation of 2012 release.

Microsoft CEO Steve Ballmer described the demoed features as the "smallest snippet of Windows 7." What looked like big features then really turned out to be "smallest snippet" later on. Apple's iPhone, launched less than a year earlier, had made multitouch all the rage. But touch has yet to really take off on Windows -- for many reasons, exhaustion being one of them. People tend to tire easier when using touch on a vertical or near-vertical display. The technology demoed better than it proved practical for the Windows mass-market.

Why not here is perhaps the better question. Microsoft is a regular D Conference attendee, and the event is hugely promoted and reported. Some other reasons:

Microsoft could easily wait until its September developer conference to take the wraps off Windows 8. Some reasons why not and why not wait:

Sinofsky's challenge will be wooing the crowd -- generating excitement about Windows 8 before rival Apple says boo about Lion. In business perception is everything. While Windows has enormous PC market share, many perceive Microsoft and the operating system to be in decline. D9 is right place and time for Microsoft to reset perceptions. Can Sinofsky deliver? We'll know next week. For now, what do you think? Comments await your responses.

12 Responses to Will Steven Sinofsky break the Windows 8 silence?