Sarkozy: An unregulated Internet is not democracy, but populism

Just two days ahead of the 37th G8 Summit, world leaders met in Paris on Tuesday with private sector technology leaders for the first ever E>G8 Forum. The "explicit goal" of the forum is to gather the leading players of the digital ecosystem for plenary sessions, town hall meetings, and workshops to inform the heads of the G8 nations, and enrich their discussions at the Summit.

The overall theme of the Forum is "The Internet: Accelerating Growth," and included sessions today about the Internet's effect on economic growth, society, education, intellectual property, and culture. 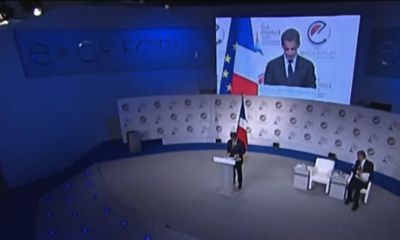 The event opened on Tuesday with a keynote by French President and G8 leader Nicolas Sarkozy in which he called the age of the Internet the "third great globalization," with the first being the age of exploration and the second being the industrial revolution.

However, Sarkozy expressed a belief that the internet needs to be infused with democracy, and not be left an ungoverned wilderness.

"The Arab [revolutions in Egypt and Tunisia] have shown us that the Internet does not belong to states or governments," Sarkozy said. "The technological and cultural revolution that the Internet has wrought has reached its first stage of maturity, but it must not forget what its original promises were…the dream of a more fraternal world. Our responsibility as heads of state is to accompany a revolution which was born in the very heart of civil society, for civil society, and has a direct impact on these very states; because technology in and of itself is neutral, and must remain so, the way the internet is used is not neutral. To think about the internet and its importance is of historical importance, and that responsibility must be shared between you [the private sector] and us."

"We, the states and governments, the members of the G8, in other words, some of the world's most powerful countries, we must recognize the role you play in the march of history, we need to listen to your expertise and learn," Sarkozy said. "But we want to tell you that the universe that you represent is not a parallel universe that is free from the rules of law, or the ethics or any of the fundamental principles that must govern the social lives our democratic states. As long as the Internet is part and parcel of the daily lives of our citizens, it would be a contradiction to leave government out of this massive discussion. No one should forget that governments in our democracies are the only legitimate representatives of the populace. To forget that would take the risk of creating democratic chaos, and therefore anarchy. To forget that would be to confuse populism with democracy."

The eG8 Forum will continue tomorrow (2:00AM EST) with an opening discussion between Vice President for the European Commission's Digital Agenda Neelie Kroes and Alcatel-Lucent CEO Ben Verwaayen, which we will be covering.

22 Responses to Sarkozy: An unregulated Internet is not democracy, but populism