Unlike a typical phishing scam looking to steal money from whomever falls for its social engineering tricks, Grosse suggested that this campaign was more for the purposes of espionage or information collection, and was targeting individuals.

"Google detected and has disrupted this campaign to take users' passwords and monitor their emails," Grosse said. "We have notified victims and secured their accounts. In addition, we have notified relevant government authorities."

Xinhua News Agency, the official press group of the government of the People's Republic of China, ran an article on Thursday calling Google's accusations groundless and hurtful to global trust on the Internet.

"The chimerical complaints by Google have become obstacles for enhancing global trust between stakeholders in cyberspace," Xinhua said.

It is an echo of events that happened early last year.

After sustaining reported "cyber attacks" in early 2010 Google said it would review its business arrangement with the government of China. Chinese authorities denied that any hacking had taken place, and indeed that any negotiations with Google were even discussed.

Xinhua at the time said Google had repeatedly threatened to pull out of the country, and ran a political cartoon with the Google logo turned into an ominous scowl draping an American flag necktie over the search field. 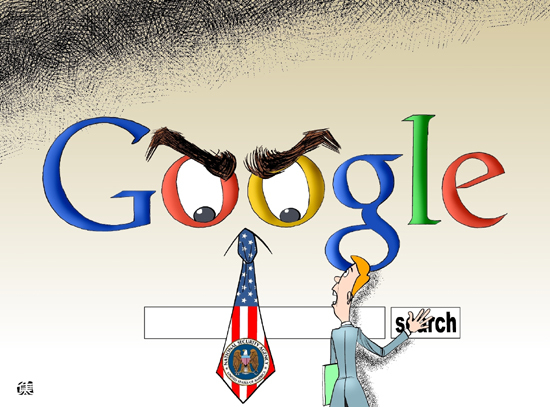 "It is a real pity that Google's baseless complaints have distress[ed] mutual trust and the efforts to establish new global governance in cyberspace, letting real online criminals obtain illegal profits without being punished," Xinhua's article on Thursday said.