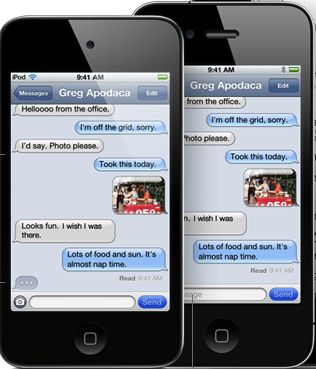 In Apple's unveiling of iOS 5 on Monday, the company revealed iMessage, a new feature that brings the functionality of BlackBerry Messenger to all iOS devices: iPad, iPhone, and iPod touch.

The feature lets users send texts, photos, videos, contact information and group messages over Wi-Fi or 3G. It has delivery receipts and "read receipts" and live typing notifications which are pushed to all of a user's iOS devices.

These features were considered a lynchpin in the BlackBerry platform with BBM. By adding them to iOS, Apple is muscling in on Research in Motion's smartphone market share, which dropped 12% in one year according to Nielsen Mobile Insights, bringing it from second place to third behind iOS and new market leader Android.