Though the name and concept behind Kinect Fun Lab leaked before its keynote, Microsoft showed off three very cool features available in Kinect Fun Labs when it launches for all Xbox 360 users later today.

The first was Xbox Live avatar creation demo called Kinect Me, which lets you snap pictures of your face and clothing with Kinect, and it's rendered as an Xbox Live avatar. It's actually exactly the same thing that Nintendo did with the Mii Maker for 3DS, but the results look a lot more sophisticated, and the clothing-scanning feature adds a bit more depth. 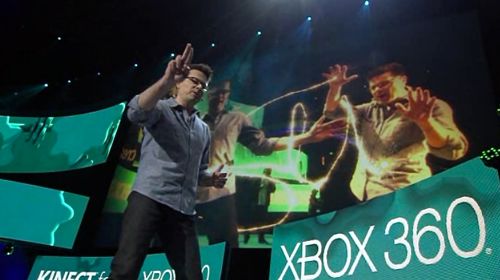 Finger tracking, a feature which MIT hackers showed off on Kinect about six months ago was the second feature shown off on Monday. One of the demonstrations of finger tracking let the user draw in 3D space with his fingertip. The result from the demonstration looked a lot like long-exposure light pen photos. Once completed, images can be uploaded to Kinectshare.com

Finally, Microsoft showed off 3D object scanning, which was pretty much an extension of the avatar creator. With this, the user can hold up an object, and take several pictures of the object's different sides, and a three-dimensional rendering of the object stitches together the images into a 3D model. Microsoft says this can be used to put real-world objects into games.

Some of the demos not shown in the keynote today include: Virtual Conductor, a very Wii Music-esque finger tracking demo, Keyboard anywhere, an invisible musical keyboard demo that was shown off as a hack on the open source Kinect driver several months ago, the rather self-explanatory "Hand Puppets" demo, and a 3D music visualizer.