The new Google.com for mobile devices looks just about the same as it did before, but adds touchable icons across the bottom of the page for "restaurants," "coffee," "bars," and "more." When "coffee" is clicked, for example, all the nearby coffee shops show up under Google Places. When users click "more," a page with nine icons appears, which adds: fast food, what's nearby, shops, ATMs, gas stations, and attractions.

Text entry has also been simplified, and Google has added its Query Builder "plus sign" which breaks Google Instant suggestions into smaller, more digestible parts so users don't have to type out full, long queries on their mobile device, but instead they can build a query word by word with Google Instant suggestions. The magnifying glass icon has also been added, which brings up Mobile Instant Previews which are the high-level page screenshots that can be scrolled through one by one to check results before you click on them.

Google today said a refreshed tablet-based search UI will be debuting in a few weeks, which will better utilize tablet screen real estate. 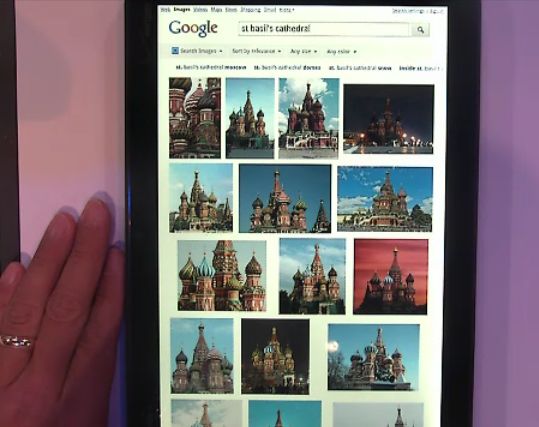