What is LulzSec afraid of? 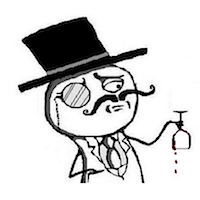 Or stated differently: Have the ill-winds of fate caught the Lulz Boat's sails?

Today, quite unexpectedly, LulzSec Security announced its retirement. "This is our final release, as today marks something meaningful to us. For the past 50 days we've been disrupting and exposing corporations, governments, often the general population itself, and quite possibly everything in between, just because we could", according to a statement from the hacker group. "Our planned 50 day cruise has expired, and we must now sail into the distance, leaving behind -- we hope -- inspiration, fear, denial, happiness, approval, disapproval, mockery, embarrassment, thoughtfulness, jealousy, hate, even love".

My question: "Planned?" Based on other LulzSec communication, the group sounded like it was in this snatch-and-post thing for the long haul -- the Lulz Boat was on a long voyage of piracy and firing its canons at many targets to come. For example, on June 23, with release of documents taken from Arizona Dept. of Public Safety servers, LulzSec writes: "Every week we plan on releasing more classified documents and embarrassing personal details of military and law enforcement in an effort not just to reveal their racist and corrupt nature but to purposefully sabotage their efforts to terrorize communities".

From that statement, I expected an ongoing release of information. Less than a week ago, LulzSec teamed up with hacker group Anonymous for mission AntiSec (Anti-Security), which seeks to expose any government-classified information that can be stolen. From LulzSec's Twitter feed: "Our next step is to categorize and format leaked items we acquire and release them in #AntiSec 'payloads' on our website and The Pirate Bay".

LulzSec called on other hackers to join the cause, later bragging about its allies: "The Lulz Boat is sailing alongside allied ships, gathering and sorting booty for the masses. How are the winds for everyone?" By all appearances, LulzSec had embarked on a long campaign of looting servers and posting the booty.

So was 50 days really the plan all along or have the winds changed? The hacker group surely has made enemies, after hacking the FBI, CIA and US Senate and, more recently, Arizona public safety. The latter data dump revealed names, addresses, cell phone numbers and other personal information of cops. If law enforcement wasn't mobilized before, surely it is now. Ill winds would bring brigadiers on pursuing warships. Has perhaps the Lulz Boat's captain peered through his telescope and spied enemies on the horizon and chosen to take safe harbor?

Maybe I missed some earlier LulzSec communication about a grand 50-day plan. Please correct me if I did. Perhaps today's announcement is just a big gag -- the Lulz Boat sending a decoy to sea, while it sails for new booty and the enemy fleet moves in the wrong direction.

If it's over then today's data dump is the last, unexpectedly, since LulzSec had promised many more, and I can't help wonder if the pirates aren't on the run. LulzSec's full statement:

Friends around the globe,

We are Lulz Security, and this is our final release, as today marks something meaningful to us. 50 days ago, we set sail with our humble ship on an uneasy and brutal ocean: the Internet. The hate machine, the love machine, the machine powered by many machines. We are all part of it, helping it grow, and helping it grow on us.

For the past 50 days we've been disrupting and exposing corporations, governments, often the general population itself, and quite possibly everything in between, just because we could. All to selflessly entertain others - vanity, fame, recognition, all of these things are shadowed by our desire for that which we all love. The raw, uninterrupted, chaotic thrill of entertainment and anarchy. It's what we all crave, even the seemingly lifeless politicians and emotionless, middle-aged self-titled failures. You are not failures. You have not blown away. You can get what you want and you are worth having it, believe in yourself.

While we are responsible for everything that The Lulz Boat is, we are not tied to this identity permanently. Behind this jolly visage of rainbows and top hats, we are people. People with a preference for music, a preference for food; we have varying taste in clothes and television, we are just like you. Even Hitler and Osama Bin Laden had these unique variations and style, and isn't that interesting to know? The mediocre painter turned supervillain liked cats more than we did.

Again, behind the mask, behind the insanity and mayhem, we truly believe in the AntiSec movement. We believe in it so strongly that we brought it back, much to the dismay of those looking for more anarchic lulz. We hope, wish, even beg, that the movement manifests itself into a revolution that can continue on without us. The support we've gathered for it in such a short space of time is truly overwhelming, and not to mention humbling. Please don't stop. Together, united, we can stomp down our common oppressors and imbue ourselves with the power and freedom we deserve.

So with those last thoughts, it's time to say bon voyage. Our planned 50 day cruise has expired, and we must now sail into the distance, leaving behind - we hope - inspiration, fear, denial, happiness, approval, disapproval, mockery, embarrassment, thoughtfulness, jealousy, hate, even love. If anything, we hope we had a microscopic impact on someone, somewhere. Anywhere.

Thank you for sailing with us. The breeze is fresh and the sun is setting, so now we head for the horizon.

Lulz Security - our crew of six wishes you a happy 2011, and a shout-out to all of our battlefleet members and supporters across the globe

Please make mirrors of material on the website, because we're not renewing the hosting. Goodbye. <3

So what do you think is going on here? Please answer in comments.

20 Responses to What is LulzSec afraid of?